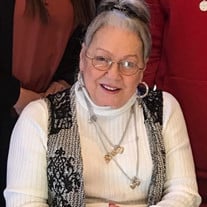 Phyllis M. Carney, age 81, passed away Saturday, October 31, 2020, at Overland Park Regional Medical Center in Overland Park, Kansas. Phyllis was born June 16, 1939 to Roy A. and Grace L. (Tyree) Hayes in Bland, Missouri. She grew up in Cooper Hill, Missouri and graduated from high school in Belle, Missouri. She worked at Normandy Hospital in St. Louis, Missouri, as a lab tech and it was during this time she met her husband, Dr. Glenn V. Carney. They were married June 13, 1959. Phyllis then joined her husband in Iola where he practiced medicine for 42 years. They were blessed with two children, Nancy Jean and Mark Alan. While a devoted housewife and mother she served as PTA President for several years, created the volunteer program at Allen County Regional Hospital. She was a member of First Baptist Church in Iola where she served in various roles for many years. She enjoyed flying and obtained her pilot's license. Phyllis was an avid gardener, loved cooking and baking, treasured time with family and her dog, Lady. Phyllis was preceded in death by her husband, Dr. Glenn Carney, who passed on January 23, 2012, as well as numerous brothers and one sister. Phyllis is survived by her sister, Peggy Taylor of St. Louis, Missouri, two children, Nancy Jean Todd and husband John Todd of Olathe, Kansas, and Mark Alan Carney of Emporia, Kansas; four grandchildren - Michael Mallery, Jacob Todd, Marah Carney, and Alexander Todd; four great-grandchildren- Cooper Mallery, Madison Mallery, Dakota Todd, and Brecklyn Todd all of Kansas City. Private family services took place Tuesday, November 3, at 1100 am to honor the life of Phyllis and the legacy she left behind at Phyllis’ final resting place in Highland Cemetery in Iola, Kansas. Lloyd Houk officiated. Memorial contributions in honor of Phyllis are suggested to A.C.A.R.F. of LaHarpe, Kansas and may be left with the funeral home. Condolences for the family may be left online at www.feuerbornfuneral.com.

The family of Phyllis M. Carney created this Life Tributes page to make it easy to share your memories.

Send flowers to the Carney family.