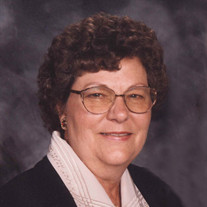 Phyllis J. Callahan, age 92, of Garnett, Kansas, passed away on Sunday, June 20, 2021, at Parkview Heights in Garnett, Kansas. Phyllis Jean Teter was born on July 6, 1928, in Garnett, Kansas. She was the third of nine children born to Tom D. and Anna (Sobba) Teter. Phyllis grew up on the family farm near Garnett, attending the Spring Branch country school north of town. After school she helped take care of her younger siblings and helped with the daily farm chores and milking. During World War II, Phyllis worked in Kansas City as a telephone operator, where she and her sisters, Dorothea and Betty rode the train to work each week. Phyllis was united in marriage to Dennis Callahan, Jr. on December 26, 1947, in Garnett, Kansas. They first made their home in Garnett before moving to the farm west of Garnett in 1959, where they raised their three sons, Dennis Michael, Patrick Gail and Ronald Ray Callahan. Throughout her life Phyllis worked with Dennis in his various business endeavors, she also worked at Warner Manufacturing and for Dr. Howard Wilson. Together, she and Dennis spent many years traveling the country with their trucking business. Phyllis enjoyed working with Dennis while they raised racehorses and raced in Eureka and Emporia, Kansas and Hastings, Nebraska. In her free time Phyllis kept busy with many activities, she was a member of Holy Angels Church and Altar Society, and the VFW Auxiliary, she especially enjoyed her time with the Hyatt Social Club. In her later years, Phyllis spent many hours volunteering at the Garnett Senior Center, ARC Thrift Store and for the hospital Auxiliary. Her friends were an important part of her life and she loved spending time with them bowling, playing cards or dominoes. Every year she looked forward to hosting the annual 4th of July picnic and fireworks. If Phyllis had an opportunity to travel she was quick to sign up for a trip to anywhere, some of her favorite places included Alaska, New York and New England. Phyllis was preceded in death by her parents; her husband, Dennis on March 22, 2004; two sons, Patrick Callahan and Ronald Callahan; granddaughter, Carissa Callahan; four sisters, Dorthea Koehler, Velva Hermreck, Betty Hiestand, Nadine Poss; and two brothers, Tom and Larry Teter. She is survived by her son, Mike Callahan and wife Joyce of Baldwin City, Kansas; five grandchildren, Eric Callahan of Garnett, Chris Callahan and wife Yan of Rogers, Arkansas, Cody Callahan and wife Britney of Verdigris, Oklahoma, Courtney Lee and husband, James of Chelsea, Oklahoma, Wesley Callahan of Washington, DC; nine great grandchildren; one brother, Norman Teter of Chico, California; sister, Mavis Horner and husband, Jerry of Wichita, Kansas; and many nieces and nephews. Mass of Christian Burial will be held at 10:30 AM on Friday, June 25, 2021, at Holy Angels Church in Garnett, Kansas. Burial will follow in the Holy Angels Cemetery, Garnett. Phyllis' family will greet friends following a 7:00 PM Rosary on Thursday evening at Holy Angels Church in Garnett. Memorial contributions may be made to St. Rose School or to the Garnett Senior Center and left in care of the funeral home. Condolences may be left for the family at www.feuerbornfuneral.com

The family of Phyllis J. Callahan created this Life Tributes page to make it easy to share your memories.

Send flowers to the Callahan family.