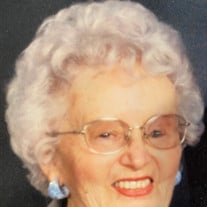 Pauline (Polly) Evelyn Hodge (Potts) Sarver passed away Sunday, November 14, 2021, in Bartlesville, Oklahoma at the age of 98. She was born in Gardner, Kansas to Nolan Earl Hodge and Fannie Alberta Skelly Hodge on May 21, 1923. Polly was the youngest of eleven children and the last surviving child. Growing up during the Depression, her family relocated multiple times to various towns in Kansas and Missouri. She graduated high school in May 1940, in Moran, Kansas. She married Harry Albert Potts in November of 1940. They resided in San Diego, California until World War II brought them back to Kansas City for Harry's job working on military planes. They subsequently moved to Iola, Harry's home town, where they raised their three children, Charlene, Darrell, and Nancy. Polly became a widow at age 32 when Harry passed away unexpectedly. She later married B. Delmer Sarver in August 1958 and they had a son, Craig. Polly worked a short time for Sears in Kansas City and Iola. She served as a secretary for the American Cancer Society in Iola for many years. She was a life-long member of the Methodist/United Methodist Church. She enjoyed traveling, playing cards, eating pie, and spending time with family and her many friends. Always by her side was a camera, as evidenced by her vast collection of photo albums. She and husband, Delmer, spent 17 winters in Florida and 2 in Texas. Following Delmer's passing, she had resided at Bartlesville Assisted Living for the past two years to be closer to her sons. Polly was preceded in death by her parents, all siblings, daughter, Charlene, and both husbands. She is survived by son, Darrell Potts and his wife Carla of Bartlesville, Oklahoma, daughter, Nancy (Potts) Laidlaw and her husband, Tom of Lafayette, Colorado, and son Craig Sarver and his wife, Tammy of Bartlesville, Oklahoma. She is also survived by seven grandchildren and many great and great-great grandchildren. A funeral service to honor the life of Pauline will be held at 10:00 A.M. on November 19, 2021, at Wesley United Methodist Church in Iola, Kansas. Burial will take place following the service at Highland Cemetery in Iola. Memorials in honor of Pauline are suggested to the American Cancer Society or Wesley United Methodist Church in Iola, Kansas, and may be left with Feuerborn Family Funeral Service or mailed to 1883 U.S. Highway 54, Iola, Kansas, 66749. Condolences for the family may be left online at www.feuerbornfuneral.com.

Pauline (Polly) Evelyn Hodge (Potts) Sarver passed away Sunday, November 14, 2021, in Bartlesville, Oklahoma at the age of 98. She was born in Gardner, Kansas to Nolan Earl Hodge and Fannie Alberta Skelly Hodge on May 21, 1923. Polly was the... View Obituary & Service Information

The family of Pauline Sarver created this Life Tributes page to make it easy to share your memories.

Send flowers to the Sarver family.