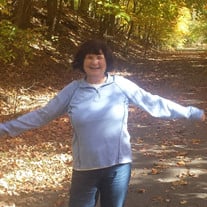 Patty Spencer, age 68, of Westphalia, Kansas passed away on Friday, January 15, 2021 after a long hard fought battle with cancer. Patricia Lou Hiestand was born on February 2, 1952 at the Anderson County Hospital in Garnett, Kansas. Patty was the third of four children born to Charles Jasper Hiestand and Georgia Mabel (Adams) Hiestand. Patty grew up on her parents farm about 8 miles SW of Welda, Kansas, along with her two brothers, Charles Jay Hiestand and Marvin Duane Hiestand, and one sister, Mary Jo Hiestand. She attended Welda Methodist Church until she was married and moved to rural Westphalia, Kansas. She attended Welda Elementary School and one year at Welda High School. After Welda High closed she attended Westphalia High School and at the age of 15 met the one and only love of her life, Raymond. Patty and Raymond began dating when they were barely sixteen years old and were inseparable from then on. On June 17, 1969 she married Raymond Byrl Spencer at Cherry Mound Church, Westphalia, Kansas. To this union, four children were born: Michael Ray, Alyson Dawn, Amy Beth and Jason Byrl. After her marriage Patty became a full time Farmwife and Mother, dedicating herself to her husband, family, and farm. Along with her husband and brother-in-law Benjamin Floyd Spencer they worked the farm and dozer business until Raymond and Patty retired in 2015. Patty enjoyed and loved her family. She loved her husband's family as well as her own and was always willing to put others before herself. Patty’s smile and outgoing personality touched everyone she came in contact with. She loved all kinds of sports and enjoyed watching her kids and grandkids as often as she could until her health no longer allowed. Even when she was unable to attend in person, she was still interested in their activities. She loved everything Kansas State, she bled purple. She was also an avid Royals and Chiefs fan. Patty very much enjoyed her yard and flowers, spending any free time she could working on it. She had a very green thumb, and always wanted anything she did to look nice. She loved doing genealogy work and has put together quite an extensive family history, visiting many locations across the United States. Patty was a member of the Cherry Mound EHU until the unit eventually closed. Family gatherings will not be the same without Patty’s hospitality and wonderful cooking. Patty is survived by her husband Raymond, her four children, Michael and Dana Spencer of Colony, Kansas, Alyson and SGM Antonio Gonzalez of DeSoto, Kansas, Amy and Cody Burkdoll of Princeton, Kansas and Jason and Brenda Spencer of Garnett; twelve grandchildren, Benjamin and Sydney Spencer, Nicholas Spencer, Madeline Spencer, Spencer Rahn, Owen Rahn, Luke Burkdoll, Connor Burkdoll, Lily Burkdoll, Hunter Spencer, Tanner Spencer, Braxton Spencer and Jase Spencer; step grandchildren, Candaesa Van Horn, J.D. Van Horn; one great granddaughter, Raelynn Grace Spencer. She is also survived by her brother and sister, Marvin and Trisha Hiestand of Topeka, Kansas and Mary Jo and Dennis Gillaspie of Tecumseh, Kansas; numerous nieces and nephews, cousins and double cousins. Patty was preceded in death by her parents, Charlie and Georgia Hiestand; her husband's parents, Byrl and Dorothy Spencer; her brother, CJ Hiestand; and one grandson, Brit Henry Burkdoll. Funeral services will be held at 10:30AM on Tuesday, January 19, 2021, at the Mont Ida Church of the Brethren, Mont Ida, Kansas. Burial will follow in the Cherry Mound Cemetery, Westphalia, Kansas. Patty’s family will greet friends from 6:00PM to 8:00PM on Monday evening at the Feuerborn Family Funeral Service Chapel in Garnett. Memorial contributions may be made to the Mont Ida Church of the Brethren. Condolences may be sent to the family at www.feuerbornfuneral.com Patricia Spencer's funeral service can be watched here: https://zoom.us/j/98472592040?pwd=NWVzR1dSU1ZYWS9XYmY2Q1VHdnQxdz09 Meeting ID: 984 7259 2040 Passcode: Spencer

Patty Spencer, age 68, of Westphalia, Kansas passed away on Friday, January 15, 2021 after a long hard fought battle with cancer. Patricia Lou Hiestand was born on February 2, 1952 at the Anderson County Hospital in Garnett, Kansas. Patty was... View Obituary & Service Information

The family of Patricia Lou Spencer created this Life Tributes page to make it easy to share your memories.

Patty Spencer, age 68, of Westphalia, Kansas passed away on Friday,...

Send flowers to the Spencer family.