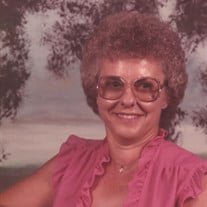 Patricia A. Rossman, age 83, of Richmond, Kansas, passed away on Wednesday, April 14, 2021, at Olathe Medical Center in Olathe, Kansas. Patricia Ann Duke was born on December 13, 1937, at Westphalia, Kansas, the second of four children born to Ray and Ann (Roth) Duke. She grew up in the Iantha neighborhood where attended Iantha country school and then Garnett High School. On December 5, 1955, Pat was united in marriage to Virgil Lewis Rossman, at St. Therese Church, Richmond. They shared 61 years of marriage and enjoyed their three children. Married life began in Roswell, New Mexico, where Virgil served two years in the United States Air Force. After returning to the Richmond area they first lived on a farm before moving into Richmond. Pat worked at Parmalee Glass and then as a nurse's aide in Garnett and at the Richmond nursing home. Pat and Virgil owned and operated the Highway Inn in Richmond from 1973 to 1978. In the late 1980's Pat and Virgil helped establish R. and B.'s Fast Food and Grocery. Pat spent the next 25 years making pies for the restaurant and others. They later owned and operated V.P. RV Park in Richmond for 20 years. Pat will be missed for her homemade pies, family gatherings for many area families will not be the same without one of Pat's pies. In her younger years Pat loved playing softball and then coaching. She enjoyed bowling, and going to the casinos. Pat was an avid sports watcher, the television always had to be tuned to whatever sport was on, the Royals were her favorite (even though they started charging to watch their games on tv). When Pat wasn't watching sports she was most likely watching the birds she loved feeding or tending to her flowers around the house. Saturday night pizza with her family was a weekly ritual as her family and grandchildren were the highlight of her life. In Pat's final days she was adamant that her cane would be "sent" with her as she had some unfinished business to conduct when she gets to see Virgil again. Pat was preceded in death by her parents; her husband, Virgil Rossman on January 8, 2017; and granddaughter, Amanda Jo Rossman; her sister, Dorothy Brock; and brothers, Chuck Duke and Bud Duke. Pat is survived by her sons, Ron Rossman and wife Becky of Ottawa, Kansas, Randy Rossman and wife Ronda of Richmond; her daughter, Susie Brown and husband Marc of Richmond; six grandchildren, Wade and Derek Brown, Stephanie and Jessica Rossman, Breanna Wuertz and Kyle Rossman; eight great grandchildren, Braden, Keaton, Taven, Weiland, Owen, Hunter, Clara, Lydia, and one great grandson, Cole, is expected in July. Mass of Christian Burial will be held at 11:00 AM on Monday, April 19, 2021, at St. Therese Catholic Church in Richmond, Kansas. Burial will follow at Richmond Cemetery, Richmond, Kansas. The family will greet friends until 7:30 PM Sunday evening at the church following a Vigil for the Deceased at 6:30 PM. Memorial contributions may be made to American Cancer Society. Condolences may be sent to the family at www.feuerbornfuneral.com.

The family of Patricia A. Rossman created this Life Tributes page to make it easy to share your memories.

Patricia A. Rossman, age 83, of Richmond, Kansas, passed away...

Send flowers to the Rossman family.