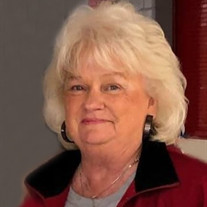 Pam Ahring, age 72, of Kincaid, Kansas, passed away on Monday, January 10, 2022, at her home. Pamela Ann Monroe was born February 18, 1949, at Garnett, Kansas. She was the second of five children born to Kenneth Roy "Bud" and Delores "Winkie" (Hayes) Monroe. Bud nicknamed Pam "Blondie" and "Hardhead" as a young girl, fortunately for her, "Blondie" stuck with Pam throughout her life. Pam grew up in Harris, Kansas, and attended school at Harris before going to high school in Garnett. Following high school, Pam went to Continental Cosmetology School in Topeka. Pam began her 54 year career of working as a hair dresser in Topeka, where she owned and operated her own shop. On February 16, 1969, Pam married Fred W. "Butch" Ahring Jr. in Garnett, Kansas, this union was blessed with two children, Travis and Tracy. They began their lives together in Lawrence, Kansas, before moving to Harris, where they lived until 1988. Pam and Fred lived in San Diego, California, until returning to Garnett in 1992. Over the next 30 years, Pam formed countless bonds with her clientele. She was their friend, therapist and confidant. Pam would even give her advice regarding her client's situation, solicited or not. As young girls, Pam and her sisters would sing and compete in talent shows as "The Monroe Sisters" at many community and family events all over Kansas. The girls auditioned for the Leroy VanDyke Show and The Ted Mack Amateur Hour. Over the course of their singing career the girls made countless memories and enjoyed many laughs together. Although fame eluded "The Monroe Sisters", their tenacity later reappeared in their pursuit of Collin Raye. Together, they attended over 75 of his shows all over the United States. Pam was a hard worker throughout her life. At the time of her passing, she was working as a hairdresser, transporting students for USD 365, and raising pheasants with her son, Travis, on their Rocken B Ranch. Her faith was an important part of her life, only surpassed by her love for her grandchildren, Trey and Tatum. One of her grandkids' memories is her use of coconut in almost every cookie or candy recipe that she made, which became a favorite joke between them. Pam was preceded in death by her parents, Bud and Winkie Monroe; husband, Fred W. "Butch" Ahring Jr. on January 17, 2006; one daughter, Tracy Ahring on October 12, 1988; two infant brothers, Larry in 1947 and Russell in 1954. Pam is survived by her son, Travis Ahring and wife, Tracey, of Garnett; two grandchildren, Trey Ahring and Tatum Ahring; two sisters, Ginny Gerhardt and husband Jim and Linda Hodgson and husband Jim, all of Topeka, Kansas; special friend, Verle Vallier of Richmond, Kansas; and many nieces, nephews, and friends. Funeral services for Pam will be held at 10:00 AM, Monday, January 17, 2022, at Feuerborn Family Funeral Service Chapel, Garnett. Burial will follow in the Garnett Cemetery. The family will greet friends on Sunday afternoon, from 2:00 to 3:00 p.m., January 16, 2022, at the funeral home. Memorial contributions may be made to Kincaid-Selma United Methodist Church and may be left in care of the funeral home. You may send your condolences to the family at www.feuerbornfuneral.com.

Pam Ahring, age 72, of Kincaid, Kansas, passed away on Monday, January 10, 2022, at her home. Pamela Ann Monroe was born February 18, 1949, at Garnett, Kansas. She was the second of five children born to Kenneth Roy "Bud" and Delores "Winkie"... View Obituary & Service Information

The family of Pamela A. Ahring created this Life Tributes page to make it easy to share your memories.

Send flowers to the Ahring family.