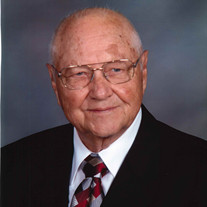 Orville J. Cole, age 92, passed away on November 7, 2020, at Olathe Medical Center. He was born in Garnett, Kansas, on March 4, 1928, the son of Ray D. Cole and Edna Mae (Reinfeld) Cole. He spent his entire life in Anderson County, Kansas, with the exception of the years he attended college in Pittsburg and Topeka, Kansas, and two years in the Army in Germany. Orville and LaVerne K. Klingenberg were married on December 26, 1953, in Concordia, Missouri. To this union were born one daughter, Kathryn E. Cole and two sons, John W. Cole and Thomas M. Cole. Orville graduated from Washburn University School of Law in Topeka in 1951. He was admitted to practice law in state and federal courts in Kansas and in the United States Supreme Court. After his army service, he returned to Garnett in 1953, where he practiced law until he retired in 1990. He was a lifelong member of the First Christian Church in Garnett and served as a deacon and chairman of the board. He served as Anderson County Attorney from 1958 to 1962. Over the years, he also served as a scoutmaster, chairman of the Fourth Judicial District Bar Association, and chairman of the Anderson County Republican Central Committee. He was a member of the VFW, Masonic Lodge, Scottish Rite and Shrine. Orville was preceded in death by his parents, two brothers Roy L. Cole and Claron G. Cole, and his grand-daughter Brittany Wales. He is survived by his wife of 67 years, LaVerne K. Cole of the home, his daughter Kathryn E. (Cole) Harvey and her husband James of Richmond Hill, Georgia, his son John W. Cole and his wife Stephanie of Gardner, Kansas, his son Thomas M. Cole of Lawrence, Kansas, and three grandchildren Ashley Grosshuesch and husband Ty of Spring Hill, Kansas, Lacey Enriquez and husband Rhett of Overland Park, Kansas, and Nicholas Wales of Phoenix, Arizona. Due to COVID-19 restrictions, a “Celebration of Life” service will be held at 11:00 a.m., on Thursday, November 12, 2020, at the Garnett Cemetery. Kindly be mindful of COVID-19 protocols if attending the graveside service. In lieu of flowers, memorial contributions may be made to the First Christian Church of Garnett, Kansas. Condolences may be left for the family at www.feuerbornfuneral.com.

The family of Orville Cole created this Life Tributes page to make it easy to share your memories.

Send flowers to the Cole family.