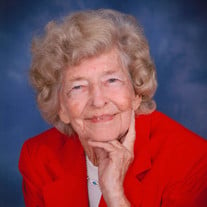 Normalee Norman, age 90, of Garnett, Kansas, passed away as the result of COVID 19 on Saturday, December 19, 2020, at Residential Living Center in Garnett with her family present virtually. On March 7, 1930, Normalee was born to James Arthur “Arch” and Alta (Bennet) Thomas. She was the third of three children in her family. She grew up in Moran, Kansas, graduating from Moran High School. Normalee was married to Ralph Mock in 1949, and this union was blessed with three sons, Victor Jonathon, Ralph Forrest “Butch”, and Stanley James Mock. Their marriage ended in divorce. Normalee married Leon Edwin “Ed” Norman on June 6, 1954, their union was blessed with one son, Michael Leon Norman. In the 1960’s, she worked as a Nurse’s Aid at the Anderson County Hospital for many years. In the 1970’s, she was a dispatcher for the Sheriff’s Office. She was office manager at AnCo Cheese Plant. She was also a bus driver and Instructor for Tri-Ko until her retirement in 1989, when she stayed home to care for Ed until his passing on January 10, 1990. Ed and Normalee dreamed of retiring to south Texas, and live the “snowbird” life. Normalee was able to realize 30 years of that dream while she lived in Pharr, Texas. She fell in love with the warm weather and Texas was the place for her. This is where she met her third husband Jim Reinardy and then her fourth husband, Bill Cowsky, both preceded her in death. In 2017 Normalee’s declining health dictated her return to Garnett to live with her son and daughter-in-law, Mike and Helen. Normalee enjoyed making crafts of any kind and generally anything that consisted of working with her hands. Some of her talents included, making a dress from scratch with no pattern, crocheting, building Barbie doll furniture for her granddaughter, renovating every house that they lived in, and painting pictures. She was an excellent woodworker and she spent many years running the ceramic and woodworking shop in the Pharr South retirement community. She possessed many more talents too numerous to mention. Normalee was a member of the Marion Chapter of the Eastern Star of Moran, Kansas. Normalee was preceded in death by her parents; stepfathers, Harry Frager and Pete Manchester; husbands, Ralph Mock, Ed Norman, Jim Reinardy, and Bill Cowsky; sons, Butch Mock (2020) and Stan Mock (2015); sister, Nadean “Deanie” and husband, Jeff Fisher; brother, Forest “Frosty” and wife, Nila Thomas. She is survived by two sons, John Mock and wife Marcella and Mike Norman and wife Helen; 14 grandchildren, Shawn, Christopher, Stacy and Alicia Mock; Ryan and Phillip Mock; Chris, Stephanie, Thomas, Jeremy, Tina and John Mock; Bryan Norman and Heather Rochefort; and 22 great grandchildren; and her sister-in-law, Hilma Thomas. Funeral services will be held at 10:00 AM on Wednesday, December 23, 2020, at the Feuerborn Family Funeral Service Chapel in Garnett, Kansas. Burial will follow in the Moran Cemetery, Moran, Kansas. Normalee's family will greet friends from 9:00 AM until the service time on Wednesday morning. Memorial contributions may be made to W.I.N.G.S. and left in care of the funeral home. Condolences may be sent to the family at www.feuerbornfuneral.com. Normalee Norman's funeral service can be watched here: https://zoom.us/j/91450154773?pwd=NFcyeXpVV1E1NHZxYUdzQ2xoM2E3Zz09 Meeting ID: 914 5015 4773 Passcode: Norman

Normalee Norman, age 90, of Garnett, Kansas, passed away as the result of COVID 19 on Saturday, December 19, 2020, at Residential Living Center in Garnett with her family present virtually. On March 7, 1930, Normalee was born to James Arthur... View Obituary & Service Information

The family of Normalee Norman created this Life Tributes page to make it easy to share your memories.

Normalee Norman, age 90, of Garnett, Kansas, passed away as the...

Send flowers to the Norman family.