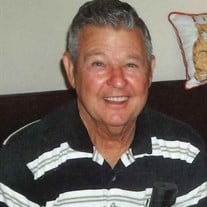 Sheldon Caudell, age 78, of Colony, Kansas passed away Friday, October 23, 2020, at the St. Luke's Hospital, Kansas City, Missouri. Neil Sheldon Caudell was born in Buffalo, Kansas to John Thomas and Wilma Moffitt Caudell on August 16, 1942. His grandparents were Tom and Bessie Caudell and Wallace and Mildred Moffitt. Sheldon graduated from Altoona-Midway High School with the class of 1960. Following graduation, he began working for his uncles, Jack and Buck, in their trailer factory in Neosho, Missouri. The following year Sheldon went to work at Walton Foundry in Iola before taking a job with Buffalo Brick in Buffalo, Kansas. In June 1963, Sheldon began working for the Kansas Department of Transportation in Garnett. Over the following 41 and a half years, Sheldon worked as Area Supervisor in Iola from 1984 to 1988, Area Superintendent in Garnett and Iola from 1988 until retiring in 2004. Sheldon also enjoyed raising cattle and farming in addition to his work for KDOT. In 1961 Sheldon met Bettie Culler, and they were married on March 24, 1962. Sheldon and Bettie made their home in Colony, where they raised their four children, Kathy, Nancy, Vicky and Terry. In 2005, Bettie lost her battle with cancer. Sheldon later met and married Ruth Wools. Their marriage blessed Sheldon with an extended family. Sheldon was preceded in death by his parents and grandparents; wife, Bettie on June 23, 2005; son, Terry Sheldon Caudell on September 18, 2003; great-grandson, Brayden Lee Yocham; two brothers, Bill Pennington and JT Caudell; and his sister, Elaine Brooks. He is survived by his wife, Ruth of the home; three daughters, Kathy Holloway and husband, Garry of Kincaid, Kansas, Nancy Ellington and husband, Ed of Colony, Vicky Hermreck and husband, Dennis of Modesto, California; 17 grandchildren; 31 great-grandchildren; brother, Charles Caudell and wife, Nancy of Hillsboro, Kansas; sister, Shirley Driskell and husband, Milford of Neodesha, Kansas; extended family, John Wools and wife, Karen of Iola, Teresa Smith and husband, Jeff of Yates Center, Kansas and Tim Wools and wife, Virginia of Iola. Funeral services for Sheldon will be held at 2:00 PM, Wednesday, October 28, 2020 at Feuerborn Family Funeral Service, 1883 US Hwy 54, Iola. Burial will follow in the Colony Cemetery. The family will greet friends from 5:00 - 7:00 PM, Tuesday evening at the funeral home in Iola. Memorial contributions may be made to the Colony First Responders and left in the care of the funeral home. Condolences to the family may be left at www.feuerbornfuneral.com. Sheldon Caudell's funeral service can be watched here: https://zoom.us/j/96980232143?pwd=aURqczVHdkNLKzRaZVkxUHlBVXQ2UT09 Meeting ID: 969 8023 2143 Passcode: Caudell

The family of Sheldon Caudell created this Life Tributes page to make it easy to share your memories.

Send flowers to the Caudell family.