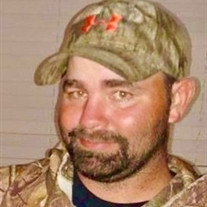 Michael Paul Scheckel, age 37, of Princeton, Kansas, passed away on Thursday, December 9, 2021, at Advent Health Shawnee Mission. He was born on May 23, 1984, in Garnett, Kansas, the son of Lynard Scheckel and Pamela (Olsen) Scheckel. Mike attended school in Garnett before graduating from Anderson County High School. Mike worked for Scheckel Farms for several years before going to work in Kansas City as a laborer with Miles Excavating. Mike worked as an operator and a laborer for several construction companies in and around Kansas City over the last fifteen years. Mike enjoyed riding motorcycles, fishing, bird hunting, gardening. Mike had an ornery streak that led him to many adventures in his younger days. He prided himself on completing whatever task he set out to do. With that twinkle in his eye and his giggle you could guess that he was thinking about what he had just done or what he was about to do. He was united in marriage to Melissa Tevis in Miami, Oklahoma on May 30, 2014. They made their home in Osage City, Kansas. In 2016 they were blessed with one son, Dylan Michael Scheckel. Mike also helped Melissa raise her four children, Tyson, Cameron, Devin and Anthony Gragg. Mike is survived by his wife, Melissa and son, Dylan of the home; four stepchildren,Tyson, Cameron, Devin and Anthony Gragg; father, Lynard Scheckel; mother, Pamela Scheckel; sister, Melissa Rivera and husband, Alex of Syracuse, Missouri; niece, Aliyah; nephews, Eric, Tyler and Joshua; and many other relatives and friends. Funeral services will be held at 10:00 AM, on Wednesday, December 15, 2021 at the Feuerborn Family Funeral Service Chapel, Garnett. The family will greet friends following the service. Condolences may be sent to the family at www.feuerbornfuneral.com

Michael Paul Scheckel, age 37, of Princeton, Kansas, passed away on Thursday, December 9, 2021, at Advent Health Shawnee Mission. He was born on May 23, 1984, in Garnett, Kansas, the son of Lynard Scheckel and Pamela (Olsen) Scheckel. Mike... View Obituary & Service Information

The family of Michael Paul Scheckel created this Life Tributes page to make it easy to share your memories.

Send flowers to the Scheckel family.