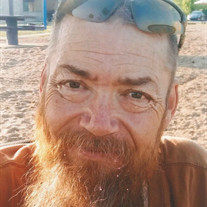 Michael “Big Mike” Eugene Holman, age 60, passed away Monday, February 1, 2021 at Neosho Memorial Regional Medical Center in Chanute, Kansas. Mike was born February 16, 1960 to Mary Louise (Morris) Holman in Iola, Kansas. He graduated from Marmaton Valley High School in Moran, Kansas with the class of 1978. Over his career he worked as a welder, owned multiple businesses, worked as a supervisor at Russell Stover for 14 years, and then ended his career working for B&W Trailer Hitches in Humboldt, Kansas. In 1984, Mike married Lori (Nelson) Holman. Their union was blessed with three children, Jarred, Katrina, and Jesse Holman. They later divorced.  Mike was a devoted family man that had many interests. He was the business owner of three bar and grills over a span of 15 years. He also had many hobbies such as, yard work, gardening, pool, hunting, wood working, tinkering in his shop, and collecting guns and many other items over the years. He was an avid Kansas City Chiefs fan. After retiring, Mike spent the remainder of his life focusing on and enjoying his children and grandchildren. He was respected by many and loved by all. Every interaction with Mike left a smile on friends’ faces. He was known as a kind, gentle, and safe man.  Mike is preceded in death by his son, Jesse Holman; mother, Mary Lou Holman; brother, Freddy Ray Holman; and numerous aunts, uncles, and cousins. Mike is survived by two children, Jarred Holman and significant other, Veronica Manchester, and Katrina Holman, and significant other, Josh Hunsperger; five siblings, Gale Holman, Susie Sluder and husband, Marvin, Ron Holman and wife, Kindith, Teresa Holman, and Grant Holman; four grandchildren, Serenity, Marley, Nolan, and Gabriel; and numerous other family members and friends.  A celebration of life service will take place to honor the life of Mike at 2:00 P.M. on Thursday, February 11, 2021 at Feuerborn Family Funeral Service in Iola, Kansas. Family will greet friends from 1:00 P.M. to 2:00 P.M. to prior to the service at the funeral home. Masks will be required during all services. Memorials in honor of Mike are suggested to the Michael Holman Memorial Fund and may be left with the funeral home or mailed to 1883 U.S. Highway 54, Iola, Kansas 66749. Condolences for the family may be left online at www.feuerbornfuneral.com.

The family of Michael "Big Mike" Eugene Holman created this Life Tributes page to make it easy to share your memories.

Send flowers to the Holman family.