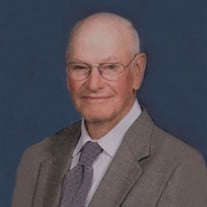 Merle F. Rockers, age 88, of Garnett, Kansas, passed away on Wednesday, March 31, 2021, at Parkview Heights, Garnett. On May 15, 1932, Merle Frederick Rockers was the fifth of seven children born to Arthur B. and Hilda Katherine (Feuerborn) Rockers. Merle attended the Junction country grade school. The farming crisis of the 1980's prompted Merle to get his G.E.D. in the event that he would have to leave the farm to get a job. Merle was a lifelong farmer and stockman. Merle and his brother, Les, formed Double R Farms, and their farming operation included row crops, cattle, hogs, and a Hoegemeyer Seed business. The farm was more than Merle's work, it was passion and his hobby. In his free time, he enjoyed going to dances, hunting squirrels, quail and pheasant, bowling. As a young man Merle loved playing town team baseball. He especially loved riding and working with horses. Merle was always looking to learn new things or expand his knowledge, he became a wealth of knowledge, and he will be missed, whether it be to identify an unknown grass, asking his opinion on farming or identifying a constellation. His spirit will live on in the family as they continue his pursuit of lifelong learning. On September 3, 1971, Merle was united in marriage to Helen L. Platt, at Holy Angels Church, Garnett. They enjoyed 49 years of marriage, throughout the years they enjoyed several trips from out of the way stops at the Barb Wire Museum to New Orleans and countless others. He was preceded in death by his parents; brothers, Bill and Les; sisters, Edith Miller, Colleen Gregory; niece, Lorraine Mariz; and nephew, Roger Rockers. Merle is survived by his wife, Helen Rockers; Helen's son, Kenny Platt and wife, Linda of Ottawa; two grandchildren, Scott Platt and Shelly Barnes; three great-grandchildren, Cameron Barnes, Aaron Platt and Jessica Platt; two sisters, Lavon Mariz and husband Carl of Irvine, California; Joella Rockers of Garnett; sister-in-law, Clara Rockers of Garnett; and many nieces and nephews. Mass of Christian Burial will be held at 10:30 AM, Tuesday, April 6, 2021, at Holy Angels Catholic Church, Garnett, Kansas. Burial will follow in the Holy Angels Cemetery in Garnett. Merle's family will greet friends following a 6:00 PM Rosary Monday evening at Holy Angels Church. Memorial contributions may be made to St. Rose School and left in care of the funeral home. Condolences may be sent to the family at www.feuerbornfuneral.com

Merle F. Rockers, age 88, of Garnett, Kansas, passed away on Wednesday, March 31, 2021, at Parkview Heights, Garnett. On May 15, 1932, Merle Frederick Rockers was the fifth of seven children born to Arthur B. and Hilda Katherine (Feuerborn)... View Obituary & Service Information

The family of Merle F. Rockers created this Life Tributes page to make it easy to share your memories.

Send flowers to the Rockers family.