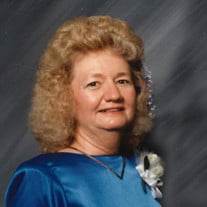 Jeanie Patterson, age 81, of Garnett, Kansas passed away on January 1, 2021 at the Residential Living Center, Garnett. Merle Jean Anderson was born on January 6, 1939 at Ottawa, Kansas. She was the third of four children born to Wayne Anderson and Dora May (Goodrich) Anderson. She grew up on a dairy farm east of Ottawa. She attended a one room country school before graduating from Ottawa High School. Throughout her life Jeanie worked in many different roles, she worked as a legal secretary, secretary for Graham's School, and restaurant owner/operator. Jeanie married Jerold Patterson on September 15, 1957 in Ottawa, Kansas. They were blessed with two sons, Jeff and Jere. They farmed north of Mont Ida, Kansas for several years and added PJ's Restaurant in 1973, which they ran for many years. Jeanie also worked with Jerold in their Patterson Farms Trucking business. After they sold their farm and trucking business, Jeanie and Jerold were able to combine work and travel as they delivered new camper trailers to dealers across the United States. Jeanie was a long time member of the Nazarene Church. She will be remembered for her patience. Jeanie enjoyed her children and grandchildren, occasionally spoiling them. In her later years she busied her mind while doing countless word puzzles. She was preceded in death by her parents, husband, Jerold Patterson on July 17, 2008, and her sister, Bonnie Gibbons. Jeanie is survived by her sons, Jeff Patterson and Jere Patterson and his wife, Daisy of Garnett; three grandchildren, Amanda Selfridge and husband, Chris, Corey Patterson and Mackenzie Nickell and Courtney Tucker and husband, Aaron; two great-grandchildren, Ryden and Rilya Tucker; and two brothers, Duane Anderson and wife, Judy of Ottawa, Kansas and David Anderson of Overbrook, Kansas. Funeral services for Jeanie will be held at 10:00 AM, Friday, January 8, 2021 at the Garnett Church of the Nazarene. Burial will follow in the Garnett Cemetery. The family will greet friends from 6:00 - 8:00 PM at the funeral home in Garnett on Thursday evening. Memorial contributions may be made to the Garnett Church of the Nazarene. Condolences to the family may be left at www.feuerbornfuneral.com.

Jeanie Patterson, age 81, of Garnett, Kansas passed away on January 1, 2021 at the Residential Living Center, Garnett. Merle Jean Anderson was born on January 6, 1939 at Ottawa, Kansas. She was the third of four children born to Wayne Anderson... View Obituary & Service Information

The family of Jeanie Patterson created this Life Tributes page to make it easy to share your memories.

Jeanie Patterson, age 81, of Garnett, Kansas passed away on January...

Send flowers to the Patterson family.