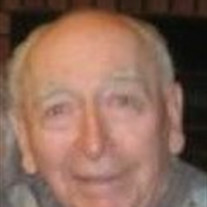 Melvin "Gene" Smith, a.k.a. Smitty, age 95, passed away Sunday, December 19, 2021, in Iola, Kansas. Gene was born April 13, 1926, to Augustus "Gus" and Elizabeth (Smoot) Smith just East of Humboldt, Kansas in the country. He attended all eight years of school in Gas Grade School and three years at LaHarpe High School. He was then drafted into the United States Army where he served. In 1988, he reunited with his childhood sweetheart and was later married in February of 1989, to Elva Dean (Thomas) Smith. From their union, he gained three step children. He worked as a salesman for Merchant Supply for 40 years. After retiring from Merchant Supply, he worked for B & W Trailer Hitches and began driving the bus for Headstart and Senior Services of Coffeyville. Gene was an amazing care giver to Elva Dean. He told everyone that the 33 years that they spent together were the best of his life! He was the kindest man and loved his family dearly. With his passing, the family has lost a man that had a plethora of stories and a wealth of knowledge for the history in Allen County. He enjoyed sharing his stories with everyone. Gene was so proud of his step-children and he loved his grandchildren and great-grandchildren. Gene is preceded in death by his parents; sister, Ella Smith; brother, Clarence Smith;and step-son, Verne Oswald, Jr. Gene is survived by his wife of the home, Elva Dean; children, Michael (Leah) Oswald and Cynthia (Brad) Hesse; grandchildren Joshua (Cindee) Oswald and three children, Jaime (Corey) Westervelt and three children, Jordan (Jessica) Oswald and three children, Bradley (Megan) Hesse and four children, Brandon (Jenna) Hesse and three children, Rhiannon (Dennis) McMurray and three children, Taylor (Jessica) Oswald and three children, and Dillon Oswald; and numerous other family members and friends. Private family services are planned. Condolences for the family may be sent to www.feuerbornfuneral.com.

The family of Melvin "Gene" Smith created this Life Tributes page to make it easy to share your memories.

Send flowers to the Smith family.