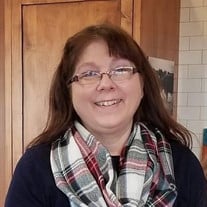 Melanie Anne Wilson, age 56, passed away Monday, August 23, 2021, at Stormont Vail Health in Topeka, Kansas. Melanie was born November 9, 1964, to Marion and Marilyn (Sutton) Sponseller in Iola, Kansas. She graduated from Iola High School with the class of 1983 before receiving her Associate's Degree from Allen County Community College in Iola. Melanie married Bill Wilson on June 1, 1984, in Iola, Kansas. Their union was blessed with five children. Melanie was a homemaker and dedicated her time to her family. Melanie is preceded in death by her mother, Marilyn Sponseller. Melanie is survived by her husband of the home, Bill Wilson; five children, Ben Wilson, Emily Jones, Elizabeth Parker, Rebecca Wilson, and Isaac Wilson; father, Marion Sponseller; grandchildren, Stella, Riley, Kaden, Alayna, Brooklyn, and Jaelynn; two sisters, Melissa Sponseller and Melinda Ferguson; and numerous other family members and friends. A funeral service will be held at 10:00 A.M. on Monday, August 30, 2021, at Feuerborn Family Funeral Service in Iola, Kansas to honor the life of Melanie. Burial will follow at Highland Cemetery in Iola, Kansas. Family will greet friends from 2:00 P.M. to 4:00 P.M. the afternoon prior to the service in The Venue at the funeral home. Memorials in honor of Melanie are suggested to A.C.A.R.F. of LaHarpe, Kansas and may be left with the funeral home or mailed to 1883 U.S. Highway 54, Iola, Kansas, 66749. Condolences for the family may be left online at www.feuerbornfuneral.com.

The family of Melanie Anne Wilson created this Life Tributes page to make it easy to share your memories.

Send flowers to the Wilson family.