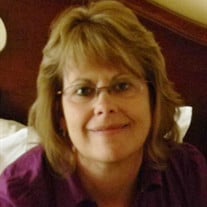 Mary Jean "Jeannie" Michael, age 62, passed away Thursday, March 31, 2022, at KU Medical Center in Kansas City, Kansas. Jeannie was born August 17, 1959, to Clarence James "Jim" and Mary "Louise" (Grenell) Hedman, in Chanute, Kansas. She graduated from Iola High School in 1977 and then furthered her education at Allen County Community College in Iola, Kansas. She dedicated around 20 years of her life to raising her son, Zach, before returning to work as a dispatcher. After dispatching, she began working for Kansas Turnpike Authority. In 2007, Jeannie married John Michael on August 15th in Emporia, Kansas. Jeannie is preceded in death by her parents, Jim and Louise Hedman. Jeannie is survived by her husband of the home, John Michael; son, Zach Scheer; step-sons, Philip and Jason Michael; daughter, Michaela Forkenbrock; brothers, David Hedman, Jim Hedman, and Mike Hedman; grandchildren, Brienna Scheer, Addisynn Scheer, Kynnzie Scheer, Jase Michael, and Karly Michael; and numerous other family members and friends. A funeral to honor the life of Jeannie will be held at 2:00 P.M. on Thursday, April 7, 2022, at Feuerborn Family Funeral Service in Iola, Kansas. Burial will follow at Highland Cemetery in Iola, Kansas. Family will greet friends from 1:00 P.M. to 2:00 P.M. on Thursday, just prior to the service. Memorials in honor of Jeannie are suggested to A.C.A.R.F. of LaHarpe, Kansas or the American Cancer Society and may be left with the funeral home or mailed to 1883 U.S. Highway 54, Iola, Kansas, 66749. Condolences for the family may be left online at www.feuerbornfuneral.com.

The family of Mary J. "Jeannie" Michael created this Life Tributes page to make it easy to share your memories.

Send flowers to the Michael family.