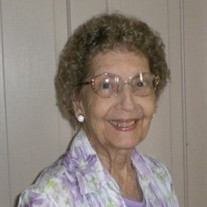 Mary Allene Van Trump Luedke of Colony, Kansas, passed away on August 13, 2021. Mary Allene was born near Elmira, Missouri on July 23, 1930, the daughter of Miller and Wilma Mesimer Van Trump. She was proud to be the third generation born on the over 100-year-old Van Trump farm. She was three years older than her brother so she was her dad's right hand, helping milk by hand a dozen cows and in the field punched wires on the stationary hay baler. She loved farming. She met Morris Luedke at the Linwood Methodist Criterion Sunday School Class in Kansas City. On April 3, 1957, they were married at the church there. In June of 1957 they moved to Colony to begin farming. They were blessed with two children, Mark Philip and Cheryl Sue. Prior to marriage, Allene worked as a secretary in Richmond, Columbia and Kansas City, Missouri. She was the farming assistant to her husband, housewife, mother, and the Colony correspondent to Iola Register and Garnett Review papers. She loved to garden, can fruit and vegetables, help her husband in the fields, and serving her community by writing the "Colony News" 47 years. Following her father's death, her mother moved to their home in Colony where Allene cared for her for four and a half years, then visited her every other day another four and a half years at an Iola nursing center. Allene loved life, her family, and the Lord. At the age of 21 she joined the Christian Church in Columbia, Missouri, serving on the church paper staff as membership secretary and recording secretary in Columbia, Kansas City, and Colony. Preceding her in death were her parents; husband of almost 59 years, Morris; two uncles; one aunt; nine brothers-in-law; eight sisters-in-law; and five nephews. Survivors include her son Mark, Colony; daughter, Cheryl, St. Augustine Beach, Florida; brother, Joe and wife Judy, Wilmington, Delaware; nephew, Joseph Miller and his family, Rozelle, Australia; niece, Michelle and family, Ft. Worth, Texas; four cousins; and numerous nephews and nieces, two grand nephews and three grand nieces. A graveside service to honor the life of Mary Allene will be held at 10:00 A.M. on Friday, August 20, 2021, at the Colony Cemetery in Colony, Kansas. Family will greet friends from 6:00 to 8:00 P.M. on Thursday, August 19, 2021, the evening prior to the service at Feuerborn Family Funeral Service in Iola, Kansas. Livestreaming information will be available the day of the service. Memorials in honor of Mary Allene are suggested to Wings of Warriors Cancer Foundation and may be left with the funeral home or mailed to 1883 U.S. Highway 54, Iola, Kansas, 66749. Condolences for the family may be left online at www.feuerbornfuneral.com.

Mary Allene Van Trump Luedke of Colony, Kansas, passed away on August 13, 2021. Mary Allene was born near Elmira, Missouri on July 23, 1930, the daughter of Miller and Wilma Mesimer Van Trump. She was proud to be the third generation born on... View Obituary & Service Information

The family of Mary Allene Luedke created this Life Tributes page to make it easy to share your memories.

Send flowers to the Luedke family.