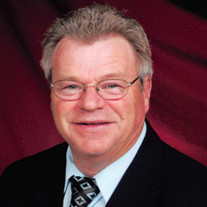 Mark A. Henry, age 68, of Gas, Kansas, passed away on Tuesday, April 26, 2022, at KU Cambridge Towers, Kansas City, Kansas. He was born in Iola, Kansas, on October 28, 1953, to George "Bud" and Ruthie (Pierson) Henry. He graduated from Iola High School, Class of 1971. He married Kandra Smith and they later divorced. They had one daughter, Amy Dawn, and one son, Jarred, from that union. He married Jerri McKee June 4, 1982. Jerri had one son, Chad. Mark worked at Cyrus Truck Line from 1973 to 1983 until the company sold. He then worked at Copy Products, Inc. in Iola from December 13, 1983, until he retired on March 20, 2020. Mark served on the Gas City Counsel for several years as well. Mark was preceded in death by his daughter, Amy Dawn; and his parents, Bud and Ruthie Henry. Mark is survived by Jerri of the home; sons, Chad McKee and wife, Terri, Jacksonville, Florida, and Jarred Henry and wife, Niki, Oskaloosa, Kansas. 3 Grandchildren: Jesse Malloy, Tulsa, Oklahoma Taner McKee, Tulsa, Oklahoma Lizzie Henry, Oskaloosa, Kansas 1 Great-Grandchild: Ashe Malloy, Tulsa, Oklahoma Brothers and Sisters: Rick and Nancy Henry of Iola, Kansas Tim and Teresa Henry of Iola, Kansas Tom and Jamie Henry of Guy, Arkansas Maggie Barnett of Iola, Kansas Pat and Ted Spencer of Gas, Kansas Julie and Dave Mader of Nevada, Missouri Brothers-in-law: Bob Davis of Colony, Kansas Ed Davis of Colony, Kansas Perry Davis of Chanute, Kansas Nieces and Nephews: 27 Nieces and Nephews 29 Great-Nieces and Great-Nephews 8 Great-Great-Nieces and Great-Great-Nephews As well as, his golf family, just ordinary guys that he loved dearly, at Allen County Country Club, all of the people he met through work, and whom ever he met. A funeral to honor the life of Mark will be held on Monday, May 2, 2022, with Rosary beginning at 9:30 A.M. followed by Mass of Christian Burial at 10:00 A.M. at St. John's Catholic Church in Iola, Kansas. Burial will take place following the service at St. John's Catholic Cemetery in Gas, Kansas. Family will greet friends the night prior to the service on Sunday, May 1, 2022, from 5:00 P.M. to 7:00 P.M. in The Venue at Feuerborn Family Funeral Service in Iola. Memorials in honor of Mark are suggested to Wings of Warriors or St. Jude Children's Research Hospital and may be left with the funeral home or mailed to Feuerborn Family Funeral Service, 1883 U.S. Highway 54, Iola, Kansas, 66749. Condolences for the family may be left online at www.feuerbornfuneral.com.

The family of Mark Anthony Henry created this Life Tributes page to make it easy to share your memories.

Send flowers to the Henry family.