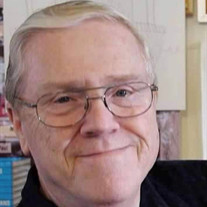 Marion Charles Sponseller, age 80, passed away, Saturday, April 23, 2022, at the Kansas City Hospice House in Kansas City, Missouri. Marion was born April 14, 1942, in Iola, Kansas, the son of Harvey Neal and Anna Elizabeth (Myer) Sponseller. Marion graduated from Iola High School in 1962. He married Marilyn Eileen Sutton on October 12, 1962. They made their home in the Iola area. Three children joined this union, Melanie Anne, Melissa Kay, and Melinda Sue. He worked at Menegay's Downtown Cafe, H.L. Miller & Son for many years, worked at Walmart in Iola, filled the pulpit in various Baptist Churches until he accepted a full-time pastorate at Community Baptist Church in Iola. He pastored there for several years before entering into retirement. Marion was a wonderful husband, father, grandfather, and great-grandfather. He loved his family and was always willing to help and encourage them. Marion was respected by others. He was always friendly and kind and had a smile for everyone. He enjoyed gardening, spending time with family, going to garage sales, studying the Bible, and fellowshipping with other Christians. He loved going to church. As a teenager, he accepted the Lord Jesus as his personal Savior. He strived to live a life that was pleasing to God. He was always willing to share his testimony with others. Marion was preceded in death by his parents; brother, Walter Neal Sponseller; wife, Marilyn; daughter, Melanie Anne (Sponseller) Wilson; and brother-in-law, Ron Stout. Marion is survived by his sister, Bonnie (Stout) Perkins and husband, Richard, of Iola; daughter, Melissa Sponseller of Iola; daughter, Melinda (Sponseller) Ferguson and husband, Richard and grandchildren, Chris, Mason, and Clara, of Moran, Kansas; son-in-law, Bill Wilson, and grandchildren, Isaac and Rebecca Wilson of Iola, Kansas, Benjamin Wilson of Garnett, Kansas, Emily (Wilson) Jones of Parsons, Kansas, Elizabeth (Wilson) Parker and husband, Jack, of Gardner; great-grandchildren, Stella, Riley, Kaden, Alayna, Brooklyn, Jaelynn, Jason; and numerous other family members and friends. A funeral service to honor the life of Marion will be held at 10:00 A.M. on Friday, April 29, 2022, at Feuerborn Family Funeral Service in Iola, Kansas. Burial will follow at Highland Cemetery. Family will greet friends from 5:00 P.M. to 7:00 P.M. at the funeral home the night prior to the service on April 28, 2022. Memorials in honor of Marion are suggested to A.C.A.R.F. of LaHarpe, Kansas, and may be left with the funeral home or mailed to 1883 U.S. Highway 54, Iola, Kansas, 66749. Condolences for the family may be left online at www.feuerbornfuneral.com. Marion Sponseller's funeral service can be watched here: https://vimeo.com/704543306

The family of Marion Charles Sponseller created this Life Tributes page to make it easy to share your memories.

Send flowers to the Sponseller family.