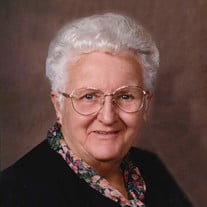 Margaret L. Hadsall, age 100, of Richmond, Kansas, passed away on Wednesday, April 7, 2021. Margaret Leona McCall was born February 3, 1921, in Kansas City, Missouri, the daughter of Clayton and Edith (Barhan) McCall. She was a lifelong resident of Richmond. Margaret attended grade school in the Berea one room schoolhouse. Margaret attended high school in Richmond, she would ride a horse or walk from the farm to get to school each day. Margaret would often recall driving her family around to visit relatives beginning when she was 15 or 16 years old. This experience became valuable later in life when she worked as a Taxi driver in Ottawa, Kansas. Margaret married Robert L. Hadsall on February 17, 1953, in Richmond, Kansas, this union was blessed with two daughters. In 1960 they moved to the farm where Margaret grew up and they continued to make that their home for the rest of her life. Margaret worked as a waitress in Ottawa for several years. She later worked at Richmond Casket Company where she sewed the interiors. Bob and Margaret eventually purchased the casket business and they operated it until 1982. In her free time Margaret enjoyed painting, sewing and knitting. Margaret enjoyed having her family over for Sunday dinners and she usually included homemade bread after she got her bread machine. In her younger years she enjoyed riding horses and going to dances at Fontana and other area dances. She was still dancing with Bob when she was in her 80's. Margaret will be missed by her family and friends, she had a zest for life and her family meant the world to her. Margaret was preceded in death by her parents; and one daughter, Velma Smith in 2003. She is survived by her husband of 68 years, Bob Hadsall, of the home; one daughter, Rhonda Frank of Richmond, Kansas; one son-in-law, Marvin Smith of Richmond, Kansas, seven grandchildren, Ronald Smith and Christy of Garnett, Kansas, Laura Deters and husband Jerry of Princeton, Kansas, Danny Smith of Richmond, Kansas, Kim Smith and Troy Beach of Rantoul, Kansas, Sara Schaffer and husband Tom of Fruitland, Idaho, Cassandra Shepherd of Richmond, Kansas and Brooke Shahriary and Ali of St. Louis, Missouri; 14 great grandchildren; and 15 great great grandchildren. A Celebration of Margaret's Life will be held at 2:00 P.M., Friday, April 16, 2021, at the Feuerborn Family Funeral Service Chapel, 219 S. Oak, Garnett, Kansas. Visitation with the family will follow the ceremony. A private family inurnment will be held later in the Berea Cemetery. Memorial contributions may be made to the Richmond Community Building and left in care of the funeral home. You may send your condolences to the family at www.feuerbornfuneral.com.

The family of Margaret Leona Hadsall created this Life Tributes page to make it easy to share your memories.

Send flowers to the Hadsall family.