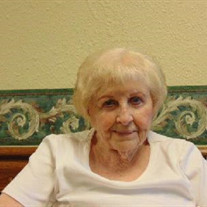 Margie L. Dugger, age 97, of Garnett, Kansas passed away on Friday, January 8, 2021, at the Anderson County Hospital, Garnett. She was born August 17, 1923, in Linn County, Kansas, the daughter of William Morton and Rosalie (Burk) Jackson. Margie was the youngest in a family of 15 with 13 living to adulthood. Margie graduated from Parker High School in 1943 and then moved to Goldendale, Washington. She married Sheldon Dugger in 1948 in Goldendale. He died in 2010 in Oregon. In 2016, Margie moved back to Kansas to live and be cared for by the loving staff at Parkview Heights. Margie was preceded in death by four brothers, Roy, Jack, Harry, and Byron (Hap); eight sisters, Nan Quaintance, Mary Davidson Hamilton, Ruby Lee, Rosalie Jackson, Genevive Davidson, Gertrude Byerley, Maxine Giffin & Doris Holderman. She is survived by her son, Steven Dugger and wife Diana of Washougal, Washington; three loving granddaughters; Marie Presley and husband Will of New Orleans Louisiana; Keely Dugger and husband Yogi Overgaard, Arizona; and Katie Dugger and husband Jeremy of Parrish, Florida: and five great grandchildren; Clara, Marilyn, Thomas, Jaxson, and Vincent. She is also survived by her 4-legged son, Zeke. Cremation is planned and inurnment will be at a later date in Washington. You may send your condolences to the family at www.feuerbornfuneral.com.

The family of Margaret L Dugger created this Life Tributes page to make it easy to share your memories.

Send flowers to the Dugger family.