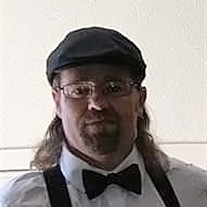 Marc Anthony Sonka, age 47, of LaHarpe, Kansas passed away on Monday, December 20, 2021 at his home. Marc was born on August 29, 1974 to Debra (Stokes) and James Sonka at Iola, Kansas. He attended schools in Iola until the family moved to LaHarpe. Marc graduated from high school at Moran. At age 14, Marc was diagnosed with a benign brain tumor. The tumor was able to be removed and Marc was able to enjoy 32 more years before it came back as a glioblastoma tumor. His family was grateful for the additional 1 1/2 years they were able to share with him. In 1994, Marc married Melissa Klauman and they had one child, Austin, they later divorced. Then, in 2000 he married Wendy Hutchins and they had one child, Geoffrey. This marriage later ended in divorce. Marc enjoyed fishing as a youth and spending time at his Aunt and Uncle's farm. He loved watching Star Trek and all it's generations on TV. He was preceded in death by James Sonka; his maternal grandparents, Allen and Rose (Turner) Stokes; his paternal grandparents, Carl and Dorothy (Criddenten) Sonka, and Bulinda (Clark) Sherwood; an uncle, Dale Stokes; and a nephew, Drake Bunnell. He is survived by his parents, Dennis and Debra Cooper; two sisters, Abigail Sonka and Chelsey (Chad) Beasley; brother, James (Shannon) DePriest; two sons, Austin and Geoffrey Sonka; five aunts, Diana (Craig) Collins, Denise (Craig) Mentzer, Helen Stokes, Susan (Don) Johns, Sheryl Ponder; three uncles, William Cooper, Richard Daut, Mike Hillbrant; grandparents, William and Thelma Hillbrant, Lawrence Sherwood; along with many cousins, nieces and nephews. A memorial service for Marc will be held at 10:30 AM, Friday, January 7, 2022 at the Feuerborn Family Funeral Service Chapel, Iola. The family will greet friends from 6:00-8:00 PM, Thursday, January 6, 2022 in The Venue at Feuerborn Family Funeral Service, Iola. Memorials may be made to Kappa Alpha Gas Cards (for cancer patients) or to the Marc Sonka Memorial Fund. Condolences to the family may be left at www.feuerbornfuneral.com.

Marc Anthony Sonka, age 47, of LaHarpe, Kansas passed away on Monday, December 20, 2021 at his home. Marc was born on August 29, 1974 to Debra (Stokes) and James Sonka at Iola, Kansas. He attended schools in Iola until the family moved to... View Obituary & Service Information

The family of Marc Anthony Sonka created this Life Tributes page to make it easy to share your memories.

Marc Anthony Sonka, age 47, of LaHarpe, Kansas passed away on...

Send flowers to the Sonka family.