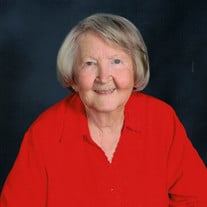 Margaret Frances (Reed) Raines, age 101, of Iola, Kansas, passed away on January 30, 2021, while residing at Windsor Place, Iola.  She was born on July 28, 1919, in Independence, Kansas, the daughter of Homer J. and Sarah “Sadie” M. (Brown) Reed.          Her career was in three professional fields: librarian, social worker, and school counselor.  Margaret was the librarian at the Officers’ Candidate School at Fort Riley during World War II, where she met and married Joe B. Raines on September 10, 1942, at Manhattan, Kansas.  He died June 22, 1975.  They had one son, Sam D. Raines.  She held Bachelor and Master's degrees from Pittsburg State University, completing graduate hours at Pittsburg State, Emporia State, and the University of Nebraska, followed by post- graduate work at Kansas State University.  In 1984 she retired from her position as Director of Library Services at Fort Scott Community College, and accepted a part-time position as reference librarian for the Southeast Kansas Library System, a position she held for twenty-one years.  Margaret was active in the Kansas National Education Association, serving on the board of directors representing higher education then retired teachers.  She was a delegate to the National Education Association Representative Assembly several times.  For sixty years she was a member of the Church of the Brethren in Independence, Kansas, before transferring her membership to Wesley United Methodist Church in Iola in 1995.  Margaret was a charter member of the PSU chapter of Psi Chi, national honor organization for psychologists, Phi Theta Kappa, Delta Kappa Gamma, Beta Sigma Phi, Iola Area Retired School Personnel Association, Current Events Club, and Wee Nick Depression Glass Club.  The family wishes to thank the entire staff of Windsor Place, Iola, and Brian and Chaplin Janie of Kindra Hospice for the kindnesses shown to Margaret and to her family while she was in their care. Margaret was preceded in death by her parents; her husband, Joe Raines; her son, Sam Raines;  her brother, Dean Reed and his wife Doris Reed; and a niece, Carol (Raines) Mader.  She is survived by her granddaughter, Samantha Starr Raines and her husband, Andrew Thomas, of Lawrence; daughter-in-law, Susan Raines, Lawrence; one nephew and two nieces, Michael Reed (Jewell) of Parsons, Susan Goodman (John), Wichita, and Jennifer Sprague (John), Davenport, Iowa; along with two nephews-in-law, Brian Raines (Amy), York, Pennsylvania, and Thayer Raines (Candace), Rutland, Vermont; and several great nieces and nephews.        A private graveside service for the family will be held at Oak Hill Cemetery, Elk City, Kansas.   Those wishing to honor Margaret’s memory may do so by donating to the Raines scholarship fund at Fort Scott Community College or the Friends of the Bowlus, Iola, Kansas, and memorials may be left with Feuerborn Family Funeral Service, 1883 US Highway 54, Iola, Kansas. Condolences for the family may be left at www.feuerbornfuneral.com.

The family of Margaret Frances Raines created this Life Tributes page to make it easy to share your memories.

Send flowers to the Raines family.