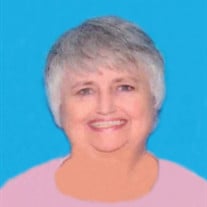 Marjorie Ann Feuerborn, age 77, of Garnett, Kansas, passed away on Friday, December 18, 2020, at Louisburg Nursing and Rehab Center, Louisburg, Kansas. She was born January 6, 1943, at Chanute, Kansas, the daughter of Lloyd and Betty (Stowell) Neptune. Marjorie graduated from Chanute High School and received an associates degree from Neosho County Community College, majoring in Business. Marjorie married Herman Joseph Feuerborn on August 25, 1962, in Chanute, Kansas. This union was blessed with eight children. Marjorie was a wife, homemaker and mother. Once the children were grown, she worked at RC&D in Ottawa, Kansas. She received an RC&D award while working there. She also worked at SRS in Osawatomie, Kansas. After learning computerized accounting she began working as a receptionist for ECKAAA, and was promoted to Fiscal Manager, and then eventually retired. Marjorie’s greatest joys were her children, grandchildren and her precious dog, Teila. She loved music, especially Elvis and Bruce Springsteen. She loved singing to her children and grandchildren. She was known for rocking her grandchildren to sleep while singing The Lion Sleeps Tonight. Marjorie was an avid reader, loved mysteries and followed her favorite authors on twitter. She liked keeping her mind sharp by reading and doing puzzles. She enjoyed sewing, which included making clothes for herself, children, grandchildren and their barbie dolls. Marjorie was known for her compassion, the love for her family ,and her dedication to her friends that she would do anything for. She will be loved and missed by all. She was preceded in death by her parents, Lloyd and Betty Neptune; her husband, Herman Joseph Feuerborn; one infant daughter, Cynthia Annette Feuerborn; two sons, Joseph Anthony Feuerborn and Thomas Michael Feuerborn. Marjorie is survived by five children, Donna Crouse and husband Daniel of Alexander, North Carolina, Lisa Feuerborn of Osawatomie, Kansas; Stephanie Feuerborn of Salina, Kansas; David Feuerborn and wife Angela of Williamsburg, Kansas; Doug Feuerborn and Lisa Athey of Richmond; ten grandchildren, Daniel Crouse and wife Ashley; Andrea Crouse, Melissa Crouse, Samantha Williams, Elizabeth Hernandez, Selena Feuerborn, Sabrina Feuerborn, Brandon Feuerborn, Joseph Feuerborn and Kaylee Feuerborn; five great grandchildren, Noah Cutrell, Brynn Crouse, Cecelia Crouse, Maverick Barker and Micah Williams; and many extended family members. Mass of Christian Burial will be held at 2:00 p.m., on Wednesday, December 23, 2020, at St. Boniface Catholic Church, with burial following in St. Boniface Cemetery, Scipio. A Rosary will be said at 6:00 p.m., on Tuesday evening, December 22, 2020, at the Feuerborn Family Funeral Service Chapel, Garnett, with visitation to follow. Memorial contributions may be made to American Heart Association or to the St. Boniface Catholic Church. You may send your condolences to the family at www.feuerbornfuneral.com.

The family of Marjorie Ann Feuerborn created this Life Tributes page to make it easy to share your memories.

Send flowers to the Feuerborn family.