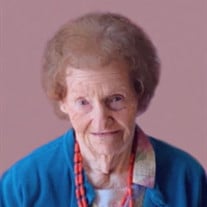 Lois Jean Kipper, age 92, of Richmond, Kansas, passed away on Saturday, April 24, 2021, at Residential Living Center, Garnett, Kansas. On January 20, 1929, Lois Jean Figg was born at Bedford, Missouri. She was the third of eleven children born to William F. and Geraldine Edith (Tompkins) Figg. Lois lived in several places as a young girl before graduating from high school at Wheeling, Missouri, with the class of 1947. After high school she moved to Kansas City where she worked as a secretary and lived with her sister. A fateful trip to the hospital to visit a friend resulted in Lois meeting her future husband, Raymond. Lois married Raymond Kipper on December 27, 1947 in Kansas City, Missouri. Their union was blessed with five children and they enjoyed 70 years together until Raymond passed away on August 28, 2017. Lois and Raymond made their home in Garnett before moving to the Eastside neighborhood of Kansas City, Missouri. Lois worked as a clerk at the Justrite Grocery Store, for 17 years. Following Raymond's retirement, they moved to their farm near Richmond, Kansas in 1974. Lois was an avid bowler, bowling in leagues and with oldest son, Vernon, for several years. Lois and Raymond were fixtures at the Richmond bingo nights. Quilting was a passion of hers, she especially enjoyed making a quilt for each grandchild and for the annual church bazaar. Lois loved tending to her garden and her roses. In her free time she could often be found working on the KC Star crossword puzzle. Her chocolate chip cookies and peanut butter cookies will be missed by her grandchildren. Lois was preceded in death by her parents, William and Geraldine Figg; her husband Raymond A. Kipper; one son, Vernon Kipper on June 18, 2009; one grandson, Trebor Rude on June 2, 2016; five brothers and one sister, Delford, Dick, Donnie, Aubery, Tom and Carolyn. Lois is survived by her four children, Robert Kipper and wife, Jane of Grand Island, Nebraska, George Kipper and wife, Penny of Independence, Missouri, Lois Rude and husband, Robert of Richmond, Kansas, and Glenda Glendenning of DeSoto, Kansas; nine grandchildren; fourteen great grandchildren; and two great great grandchildren; two sisters, Frances Wolf and Marilyn Keith of Chillicothe, Missouri; two brothers, Larry Figg and wife, Ida of Carrollton, Missouri and Bill Figg and wife, Becky of Chillicothe, Missouri. Mass of Christian Burial will be held at 10:30 AM, Thursday, April 29, 2021, at the St. Boniface Catholic Church in Scipio, Kansas. Lois' family will be present for a Vigil of the Deceased one hour prior to the service at the church at 9:30 AM until service time. Burial will follow in the St. Boniface Catholic Cemetery. Due to COVID 19 there will not be a funeral dinner following the burial, however, the family hopes to be able to get together at a later date to celebrate Lois' with all of the friends and family. Memorial contributions may be made to Hope And Love of the Laity Fund (H.A.L.L.) and left in care of the funeral home. You may send your condolences to the family at www.feuerbornfuneral.com.

The family of Lois Jean Kipper created this Life Tributes page to make it easy to share your memories.

Lois Jean Kipper, age 92, of Richmond, Kansas, passed away on...

Send flowers to the Kipper family.