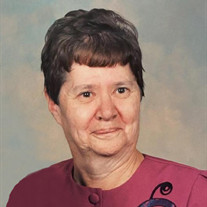 Lois Crist, age 88, of Garnett, Kansas, passed away Saturday, November 14, 2020, at the Olathe Medical Center in Olathe, Kansas. Lois Lee Clinton was born on September 17, 1932, in Omaha, Nebraska. She was the second of three children born to William Edward Clinton and Fern Iris (Hoag) Clinton. In 1934 the family moved to Garnett to be near Fern’s family. Lois always cherished the relationship she developed with her Auntie, Inez Shores in her formative years. Lois graduated from Garnett High School with the class of 1950. On February 22, 1953, she was united in marriage to Milo R. Crist in the First Baptist Church, Garnett. Lois and Milo raised six children on their farm south of Garnett. While the children were young, Lois worked alongside Milo on the farm and in their dairy. She demonstrated her strength to her children as she taught them the value of self-sufficiency, raising much of their food. In the 1970s she fulfilled a lifelong desire to earn a college degree. In 1980, Lois’ determination drove her to earn her Bachelor's Degree from Ottawa University, at the age of 47. She then began teaching kindergarten and working as the librarian at Westphalia Elementary. She continued as the kindergarten teacher after the school went to all day kindergarten, retiring in 1997. Lois was a member of the First Baptist Church for many years. Later becoming a member of the First Christian Church, where she especially enjoyed volunteering. Lois was a very creative person, expressing herself through her paintings. She enjoyed sharing her work with family and friends. In her free time, Lois was a voracious reader, and she passed that on to her children. She also enjoyed tending her flowers. Lois was ahead of her time with regard to prioritizing her health, exercise and diet. Her sense of adventure and resilient spirit will be missed by those who knew and loved her. She was preceded in death by her parents; her husband, Milo Reed Crist Sr. in 2004; daughters, Janice Crist in 1991 and Shirley Orlando in 2017; son, Mike Crist in 2017; and one brother, Richard Clinton. Lois is survived by three daughters, Connie Scott of Potosi, Missouri, Lela Scheckel and husband, Gene of Owasso, Oklahoma and Karen Terrill and husband, Stuart of Wichita, Kansas; ten grandchildren; seven great-grandchildren; and one sister, Beverly Fink of Manhattan, Kansas. Funeral services will be held at 10:30 AM, Saturday, November 21, 2020, at Feuerborn Family Funeral Service, Garnett. Burial will follow in the Garnett Cemetery. The family will greet friends from 6:00-8:00 PM Friday evening at the funeral home. Memorial contributions may be made to Friends of the Library or to ACARF (Allen County Animal Rescue Facility) and left in the care of the funeral home. Condolences may be sent to the family at www.feuerbornfuneral.com. Lois Crist's funeral service will be livestreamed via Zoom. The service can be viewed here: https://zoom.us/j/93029068722?pwd=YVRLSXVGV3FHN0ZkM3Q2SUUzRllVUT09 Meeting ID: 930 2906 8722 Passcode: Crist

Lois Crist, age 88, of Garnett, Kansas, passed away Saturday, November 14, 2020, at the Olathe Medical Center in Olathe, Kansas. Lois Lee Clinton was born on September 17, 1932, in Omaha, Nebraska. She was the second of three children born... View Obituary & Service Information

The family of Lois Lee Crist created this Life Tributes page to make it easy to share your memories.

Send flowers to the Crist family.