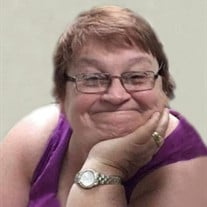 Lisa R. (Tegethoff) Holmes, age 63 of Garnett, Kansas, passed away on Wednesday, August 4, 2021, at St. Luke's South Hospital in Overland Park, Kansas. She was born October 17, 1957, in Washington, Kansas, the daughter of Duane and Glenda (Funke) Tegethoff. Lisa graduated from Topeka West High School. She married David T. Holmes on August 23, 1975, in Topeka. This union was blessed with their daughter Denise. Lisa enjoyed crocheting, cross stitching, ceramics, and diamond painting. She took so much pride in her creations, often gifting them to others to be a treasured memory. In high school, she worked at Woolco where she met David, the love of her life. After they married, she worked at Coker's Five and Dime, Warner Manufacturing, and Casey's. Lisa ran a home daycare for many years. Lisa was considered an honorary family member to many of her daycare families. Most recently she was employed at the Southeast Kansas Mental Health Center as a Peer Support Counselor. She was preceded in death by her father, Duane Tegethoff. Lisa is survived by her husband, David Holmes, of the home; daughter, Denise Carlson and her husband Brian of Garnett, Kansas; grandson, Lathan Woodson; step granddaughter, Rachel Carlson; step grandchildren, Brooklyn, Chevy, Myah, and Harper; her mother, Glenda Tegethoff of Topeka, Kansas; brother, Brent Tegethoff of Fort Scott, Kansas; two sisters, Carla Tegethoff and Lesli Ashburn, both of Topeka; niece and nephew, Korie and Jacob Ashburn of Topeka, and other extended family. A celebration of life will be held at 2:00 pm on Wednesday, August 18, 2021 at Feuerborn Family Funeral Service Chapel, Garnett, with inurnment following at the Garnett Cemetery. Memorial contributions may be made to W.I.N.G.S., and left in care of Feuerborn Family Funeral Service, PO Box 408, Garnett, Kansas, 66032. You may send condolences to the family at www.feuerbornfuneral.com .

The family of Lisa R. Holmes created this Life Tributes page to make it easy to share your memories.

Send flowers to the Holmes family.