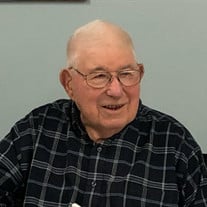 Lavern Charles Scheckel, age 93, of Garnett, Kansas, passed away on Friday, June 18, 2021, at Guest Home Estates in Garnett. He was born on December 20, 1927 at Richmond, Kansas. Lavern was the first of nine children born to William and Mary (Wolken) Scheckel. Lavern attended the one room Star School before going to high school in Greeley, where he graduated as Salutatorian of his class. While still in school, Lavern and his brothers operated the family farm after their father was injured in an accident. Following high school, Lavern began working at the Greeley Co-Op until he was drafted into the US Army. He was a veteran of the Korean Conflict, serving in Japan during the war. After the service, Lavern returned to Greeley where he became the manager of the Co-Op. On September 6, 1954, Lavern was united in marriage to Anna Belle Lickteig at St. John's Catholic Church in Greeley, Kansas. Their union was blessed with five children. They made their home in Greeley until 1962 when Lavern purchased the Western Auto store in Garnett. Lavern operated Western Auto until 1977, when he went to work for BEAM Electric at Greeley. In 1981, Lavern was proud to begin working on the construction of the Wolf Creek Nuclear Power Plant in Burlington. During this time, Lavern started Scheckel Supply, selling tires, batteries and guns from a shop adjacent to their home. He was widely known amongst gun enthusiasts throughout eastern Kansas during this time. Lavern continued to operate this business until he was in his 80's. His small shop saw visitors from every walk of life, from rich to poor, and Lavern famously treated them all with the same respect. One of the pillars of Lavern's business was his ability to greet his customers by name when they walked through the door. He valued them not just as customers, but as true friends. He was proud of his long-term connections to so many people through all his business endeavors. Lavern was well known for his whimsical sense of humor. Even while he was in assisted living during his final months, he loved pranking any of the new staff. Lavern's Catholic faith was an integral part of his life and he shared that with his children, as they all attended Holy Angels School and weekly Mass. As Lavern's health failed toward the end of his life, his will never wavered. Though he was known for his practicality and consistency throughout his life, it will be his kindness and generosity that will be most remembered by the countless people he helped. Lavern was preceded in death by his wife, Anna Belle Scheckel on June 9, 2018; brothers, Norbert, Gilbert, Charles, and Ambrose; and one sister, Berneice Peterson. He is survived by his five children, Gene Scheckel (Lela) of Owasso, Oklahoma, Cindy Molini (William) of Excelsior Springs, Missouri, Roger Scheckel of Garnett, John Scheckel (Kathy) of Ottawa and Mary Lou Scheckel of Garnett; eight grandchildren, Marisa, Melanie, Sarah, Caleb, Benjamin, Britta, Jenna and Regan; one great granddaughter, Mila; three sisters, Mildred Schommer of Iola, Elsie Kratzberg of Greeley, and Eva Vinton (Rick) of Chestertown, Missouri and many beloved nieces, nephews, cousins and friends. Mass of Christian Burial will be held at 11:00 AM on Tuesday, June 22, 2021, at the Holy Angels Catholic Church in Garnett, Kansas. Burial will follow in the St. Boniface Catholic Cemetery in Scipio, Kansas.The family will greet friends Monday evening following a 7:00 PM Rosary at Feuerborn Family Funeral Service, Garnett. Memorial contributions may be made to St. Rose School and left in care of the funeral home. Condolences may be left for the family at www.feuerbornfuneral.com.

Lavern Charles Scheckel, age 93, of Garnett, Kansas, passed away on Friday, June 18, 2021, at Guest Home Estates in Garnett. He was born on December 20, 1927 at Richmond, Kansas. Lavern was the first of nine children born to William and Mary... View Obituary & Service Information

The family of Lavern Scheckel created this Life Tributes page to make it easy to share your memories.

Send flowers to the Scheckel family.