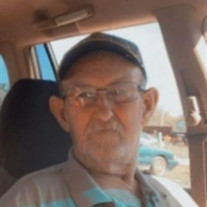 Larry R. Trester Sr., age 69, of LaHarpe, Kansas passed away on December 30, 2021 at his home. Larry was born August 6, 1952, in Colony, Kansas, the son of Bert and Maxine (Scheer) Trester. Larry attended Gas City and La Harpe schools. On July 1, 1978, he married Sylvia Jean Vest in Iola, Kansas. They were blessed with two sons, Larry Jr. and Chad. Larry worked for Walton's foundry, I.M.P. Boats, Ray's Metal Depot, and numerous other jobs. He volunteered for the La Harpe rural fire department for 20 years, serving as chief for 5 years. Over the years Larry enjoyed many hobbies from camping, racing to pony pulling. He spent countless hours with his family fishing and hunting coyotes with hounds. He was all about his grandchildren, telling them wild stories and showing his love to them by teasing, tormenting and arguing with them. Larry did his best to make all of his grandchildren's activities. Larry was preceded in death by his son, Chad Trester on November 25, 2020; granddaughter, MaKala LaRue; three brothers, Jerry, Ivan and Gary Trester; and one sister, Beverly Hoddy. Larry is survived by his wife Sylvia Jean Trester of the home; son, Larry R. Trester, Jr. and wife Chloe of Humboldt, Kansas; eight grandchildren, Brianna, Andrya (Greg), Kris, Bryson, Elizabeth, Cailee, Elijah, and Kirby; one great-granddaughter on the way; daughter in law, Tristan Trester of Dexter, Kansas; one brother, Carl Trester; two sisters, Judy Burkholder and Sharon Trester. Larry's family will greet friends from 6:00 PM to 8:00 PM Thursday evening, January 6, 2022 at Feuerborn Family Funeral Service, 1883 US Hwy 54, Iola, Kansas. Memorial contributions may be made to the Larry Trester Sr. memorial fund and left in care of the funeral home. Condolences to the family may be left at www.feuerbornfuneral.com.

The family of Larry R. Trester Sr. created this Life Tributes page to make it easy to share your memories.

Send flowers to the Trester family.