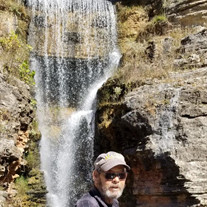 Ken Miller, age 54, of Garnett, Kansas, passed away on Saturday, January 2, 2021, at his home. He was born May 25, 1966, in Olathe, Kansas, the son of Everett and Betty (Cook) Miller. Ken joined the U.S. Navy serving from 1985 to 1998, during Desert Storm and the Cold War. Ken married Michelle Rentmeester on October 19, 1990 in Green Bay, Wisconsin. This union was blessed three children. Ken was a proud Navy man, patriot, and an even prouder family man. He always believed he was blessed when his children, their spouses, and grandchildren filled the house with their joking around and laughter. He enjoyed hunting, fishing with friends, and traveling in his camper with no particular destination in mind. He loved riding his motorcycle as a patriot guard with his wife and friends and took great pleasure when his children started driving their own. He loved his MG midget and MGB, from his brother Jake, which included working on them, showing them off and his wife and him chasing each other around town. He took great pride in preparing smoked meats and was elated when a smokehouse outdoor kitchen became reality. He has always loved and owned dogs and had a new found interest in owning homing pigeons releasing them all over Anderson County and racing them home. He loved to try exotic foods and was always looking for interesting places to eat. He was the type of man that was always willing to sit down for a conversation over a cup of coffee and willing to help anyone out. He enjoyed music and loved attending Blues Festivals with his girls, kicking back with the musicians. He was preceded in death by his parents; foster daughter, Allison Voss; one brother, Kevin Miller; and his best friend, Mike Kirk. Ken is survived by his wife, Michelle Miller, of the home; three children, Shawn Miller and wife Jessica of Garnett, Kansas; Brittany Miller of Garnett, Kansas; and Danielle Miller and wife Makayla Quinn of Iola, Kansas; two grandchildren, Lilly and Adrian Miller; two brothers, Jake Miller and wife Billie of Dury, Missouri; Austin Miller and Karri of Overland Park, Kansas. Funeral services will be held at 11:00 a.m., on Saturday, January 9, 2021, at Feuerborn Family Funeral Service Chapel, Garnett, with burial following in the Garnett Cemetery. The family will greet friends at 10:00 a.m., one hour prior to the service at the funeral home. Memorial contributions may be The Grandchildren Graduation Fund. You may send your condolences to the family at www.feuerbornfuneral.com. Ken Miller's funeral service can be watched here: https://zoom.us/j/95926440970?pwd=K1dIU21sSC9xSmRodUpQRWRnWVFvQT09 Meeting ID: 959 2644 0970 Passcode: Miller

The family of Ken Miller created this Life Tributes page to make it easy to share your memories.

Ken Miller, age 54, of Garnett, Kansas, passed away on Saturday,...