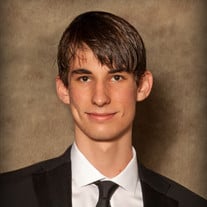 On August 25, 2021, Joseph (Joey) Lee Hermreck, 17 years old of Moran, Kansas chose to leave this earth and join his beloved family members who passed before him. Joey was born on August 26, 2003, in Olathe, Kansas to Tamara (Tammy Lindsay) Sander and Randy Hermreck. Joey was a Senior at Anderson County High School in Garnett, Kansas and was pursuing a career with the U. S. Marine Corps after graduation. Joey was an avid gamer and a huge Star Wars fan. He enjoyed fishing and his beloved dog, Daisy, but mostly loved his family and, spending time with his girlfriend Hayley. He treasured the times spent running around with Aaron, Dustin, Jimmy, and countless other friends. Joey was preceded in death by his sister, Hailey May Ross, his maternal grandfather, Jerry Lindsay (who referred to him as Joey the punk), maternal great grandparents, Emmett and Dixie Lindsay and Lyle and Clara Holloman, paternal grandparents, Jack and Velma Hermreck; paternal great grandparents, Vernon and Ruby Croan and Dick and Hazel Hermreck; two cousins, Brian Hermreck, DaVonte Matney. Joey is survived by his mother and step father, Tammy and Nick Sander of the home, his father, Randy Hermreck of Garnett, Kansas; one sister, Kristin Smith and husband Sam of Columbus, Kansas, two brothers, Toby Sander of Michigan and Brock Sander of the home; maternal grandmother, Cindy Lindsay of Garnett, grandparents, William and Jeanne Harles, La Harpe, Kansas; Paul and Kat Sander of Bronson, Kansas; great grandmothers, Eva Wagner of La Harpe, Kansas and Henrietta Sander of Elsmore, Kansas; cousin, Cassie Matney; numerous aunts, uncles, cousins, and friends. Joey will be deeply missed by all who knew him. Joey may not have realized how many lives he touched in his few short years with us but rest assured he left his mark on every heart he encountered. Funeral services will be held at 10:00 a.m., on Thursday, September 2, 2021, at Church of the Nazarene, Garnett, with burial to follow in the Kincaid Cemetery, Kincaid, Kansas. The family will greet friends at the funeral home on Wednesday evening from 5:30 p.m. to 7:30 p.m. with a memorial balloon release organized by the Anderson County student body at the stadium at the high school. In lieu of flowers, memorial contributions may be made to Feuerborn Family Funeral Service to help the family defray expenses. You may send your condolences to the family at www.feuerbornfuneral.com.

On August 25, 2021, Joseph (Joey) Lee Hermreck, 17 years old of Moran, Kansas chose to leave this earth and join his beloved family members who passed before him. Joey was born on August 26, 2003, in Olathe, Kansas to Tamara (Tammy Lindsay)... View Obituary & Service Information

The family of Joseph Lee Hermreck created this Life Tributes page to make it easy to share your memories.

Send flowers to the Hermreck family.