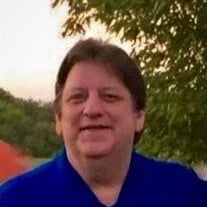 John Christopher Shields, age 63, of Garnett, Kansas, passed away on Tuesday, October 13, 2020. John, better known as "Johnny", was born on March 26, 1957, in Elgin, Illinois, the son of Raymond and Florence (Hermreck) Shields. John moved to Garnett from northern Illinois in 1966, with his family. He attended Holy Angels School and then Garnett High School, graduating in 1975. While at GHS, John was part of the school newspaper and yearbook staff. He was a longtime member of Holy Angels parish. Following school, John lived in Pueblo, Colorado for a time before returning to Garnett where he began working for the City of Garnett Public Works. John then began working as a garment cutter for Warner's Manufacturing. He worked there for most of two decades, until the closing of the factory. John found local fame as the overnight clerk at Bill's Quick Shop south of Garnett. Customers could always count on a cheerful greeting and Johnny's willingness to discuss the latest sporting news. Johnny was an avid sports fan, and knew all the latest stats on all his favorite teams, KU Jayhawks, St. Louis Cardinals, Chiefs and Royals. Perhaps the only thing Johnny liked more than sports was music. He was an avid follower of several forms of music, but country rock topped them all. He loved to tell stories and loved to laugh, his quick wit brought joy to so many. His loves included Chevrolets, baseball, his faithful border collie, Ruby; his large circle of friends and his family, including his many cousins, near and far. These were the things that defined "Johnny". He was preceded in death by his father, Raymond Shields in 1964; and his mother, Florence Shields in 2012. Johnny is survived by three brothers, Bill (Karol) Shields of Austin, Texas; Mike (Kathy) Shields of Manhattan, Kansas; Norm (Debbie) Shields of Greeley, Kansas; three sisters, Rita (Rick) Skillman of Garnett, Kansas; Kathy (Larry) Spencer of Belton, Missouri; Laurie (Pat) Marmon of Garnett; six nephews, Matt Skillman, Wesley Skillman, Ryan Spencer, Kyle Marmon, Aaron Marmon, Marcus Marmon; two nieces, Valerie Noack and Kayla Shields. A Funeral Mass will be held at 3:00 PM on Friday, March 26, 2021, at Holy Angels Catholic Church in Garnett, Kansas. Inurnment will follow at the Holy Angels Cemetery in Garnett, Kansas. Family will greet friends following the inurnment at the Kirk House, 145 W. 4th Ave., Garnett, Kansas. Memorial Contributions may be made in his name to St. Rose Catholic School.

The family of John Shields created this Life Tributes page to make it easy to share your memories.

Send flowers to the Shields family.