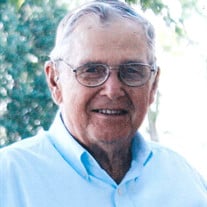 John Lanzrath, age 93, better known as Ronald to family and friends, passed away on Monday, December 14, 2020, at Olathe Medical Center, Olathe, Kansas. He was born on January 16, 1927, in Anderson County, Kansas, the son of Lawrence and Hattie (French) Lanzrath. They lived on a farm near Goodrich, Kansas. He was one of seven boys and one sister. He worked on a family farm growing up. On December 5, 1945, he joined the United States Army and served time in Germany and was discharged on December 16, 1946. He met and married Irmina Rommelfanger of Greeley on June 10, 1952. They were blessed with a son and four daughters, and made their home on a farm near Parker, Kansas. Until he was 90 years old, he continued to farm. Ronald was best known to neighbors as being a great steward of the land. He took from it to farm but also took care of it. He was a remarkable man, with integrity, honesty, and a sense of humor that we all loved. He would do anything to help a neighbor. He loved spending time with his grandchildren, Berdena Lawhead and Joe, Becky Stroman and Will, Tammy Daulton and Rick, Tracy Bryant and Scott, Jason Martz, Robin Kolb and Jeremy, Tim Barrett and Shelly, Randy Barrett and Adriane and Devon Morris. His joy in his later years was being around his great grandchildren, Jake Lawhead, Aiden Garron, Gracyn, and Laston Daulton,Owen, Caleb and Gabe Bryant, Andrew and Anthony Kolb, Jastin Wright, Kinsley and Lukas Barrett, Hudson and Lincoln Barrett. He was preceded in death by two granddaughters, Devon Morris and Becky Stroman; one son-in-law, Bernie Gilner; his parents, and many of his siblings. Ronald is survived by his wife Irmina Lanzrath, of the home; children, Barbara Gilner, Chris Martz and John, Bob Lanzrath, Karen Barrett and Dennis, and Donna Morris and Dan; two brothers, Willis Lanzrath of Wichita, Kansas and Ralph Lanzrath of Andover, Kansas. His legacy to his children, grandchildren, and great grandchildren, is his honesty, integrity and sense of humor. Hopefully these gifts will get them through any tough bumps on the road of life. Mass of Christian Burial will be held at 10:30 a.m., on Thursday, December 17, 2020, at St. John’s Catholic Church, Greeley, with burial to follow in the St. John’s Catholic Cemetery. The family will greet friends one hour prior to the service at the St. John’s Hall. Memorial contributions may be made to St. Rose School or the St. John’s Catholic Church. You may send your condolences to the family at www.feuerbornfuneral.com.

John Lanzrath, age 93, better known as Ronald to family and friends, passed away on Monday, December 14, 2020, at Olathe Medical Center, Olathe, Kansas. He was born on January 16, 1927, in Anderson County, Kansas, the son of Lawrence and Hattie... View Obituary & Service Information

The family of John "Ronald" Lanzrath created this Life Tributes page to make it easy to share your memories.

Send flowers to the Lanzrath family.