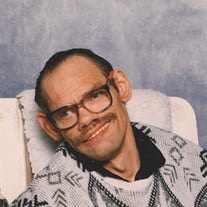 John William Perkins, of Parsons, Kansas died Wednesday, November 18, 2020 at his home. He was 74 years old. He was born February 14, 1946 in Kansas City, Missouri to Dee and Claire Annice Perkins. He was born with severe cerebral palsy. He grew up on the family farm in Bronson, Kansas. John was treated like a “normal” person, engaging in most activities in some way. Shortly after the death of his father Dee, he was placed in the State Hospital in Winfield, Kansas. Despite his disability, he always thought of others. He was instrumental in setting up a program to collect money for Jerry’s Kids while in Winfield. His family kept in contact through monthly trips and letters. He spent many years there until it was closed. John was then moved to Parsons, Kansas where he had his own apartment and staff. Through the later years, he got to come back to the farm to see his mother and brother when he wanted. He was a member of the Moran-Bronson Methodist Church and the Helpful Neighbors Club. One of his lifelong activities was watching soap operas, started by his grandmother. He also loved the Kansas City Chiefs. He worked in a sheltered workshop in Parsons and later had a computerized button business out of his apartment. John was preceded in death by his parents and infant brother, James Lee. John is survived by a brother, Wayne Dee Perkins of Bronson, Kansas. He may have been born disabled, but he was not handicapped! A graveside service will be held in honor of John at 11:00 A.M. on Monday, November 23, 2020 at the Bronson Cemetery in Bronson, Kansas. Memorials in honor of John are suggested to Saint Luke’s Home Care & Hospice and may be left with Feuerborn Family Funeral Service in Iola, Kansas or mailed to 1883 US HWY 54, Iola, KS 66749.

John William Perkins, of Parsons, Kansas died Wednesday, November 18, 2020 at his home. He was 74 years old. He was born February 14, 1946 in Kansas City, Missouri to Dee and Claire Annice Perkins. He was born with severe cerebral palsy. He... View Obituary & Service Information

The family of John William Perkins created this Life Tributes page to make it easy to share your memories.

Send flowers to the Perkins family.