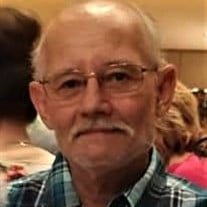 John F. "Punk" Kress, age 64, passed away Wednesday, April 21, 2021, at his home in Iola, Kansas surrounded by family. Punk was born August 20, 1956 to Charles and Betty (Trowbridge) Kress in Iola, Kansas. He attended school in both Piqua and Yates Center. In 1984, he married Alzina (Smith) Kress in Iola, Kansas. Punk was a skilled mechanic his entire career and was well known for his work in the Southeast Kansas area. He owned and operated his business in Gas, Kansas for the last 14 years before officially retiring in 2021. Throughout his life, Punk was known for being an extremely hard worker. He was very knowledgeable when it came to vehicles. There were very few things that Punk wouldn't attempt to turn a wrench on. He never slowed down and he always did his work the right way, no matter how long it took. Punk was known for being the man that you could always depend on and was just a call away. Over his lifetime, he made numerous memories with family that will never be forgotten, especially with his grandchildren. Hunting, fishing, and road trips were activities that he truly enjoyed whenever he was not at the shop working. Punk was a fair man that was always tried to do right by everyone. He would help anyone he could, given the opportunity. Punk was a respectable man that will be remembered for being the rock of his family. Punk is preceded in death by his parents; and brother, Kirk "Pete" Kress. Punk is survived by the wife of the home, Alzina Kress; children, Randy Kress and wife, Janna, Amy McWilliams and husband, Mac, Kendra Klassen and husband, Jeff, and Trevor Kress; siblings, Charyl Kress-Link, Diane Stine and husband, Bob, Chuck Kress and wife, Jan, and Lori Jay; grandchildren, Baleigh Seeber, Kerby Miller, Shayley Miller, Kara Miller, Page Kress, Robert Cook, Olivia Kress, Raiden Cook, and Ellie Klassen; and numerous other family members and friends. A service to honor the life of Punk will be held at 10:00 A.M. on Thursday, April 29, 2021 at Feuerborn Family Funeral Service in Iola, Kansas. Family will greet friends from 6:00 P.M. to 8:00 P.M. on Wednesday, April 28, 2021, the day prior to the service in The Venue at the funeral home. Memorials in honor of Punk are suggested to Wings of Warriors Cancer Foundation and may be left with the funeral home or mailed to 1883 U.S. Highway 54, Iola, Kansas, 66749. Condolences for the family may be left online at www.feuerbornfuneral.com.

John F. "Punk" Kress, age 64, passed away Wednesday, April 21, 2021, at his home in Iola, Kansas surrounded by family. Punk was born August 20, 1956 to Charles and Betty (Trowbridge) Kress in Iola, Kansas. He attended school in both Piqua and... View Obituary & Service Information

The family of John F. "Punk" Kress created this Life Tributes page to make it easy to share your memories.

Send flowers to the Kress family.