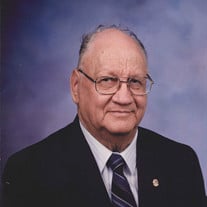 John Anton Fursman, Jr., age 99, of Colony, died Thursday, January 14, 2021, at Garnett, Kansas. Mr. Fursman was born at the home of his grandparents Erastus Dayton Himes and Emily Thomas Himes on Pasadena Street in the Clinton Subdivision in Iola, Kansas, to John Anton Fursman, Sr. and Pearl Lillian Himes Fursman on September 13, 1921. He was the second of three children, with an older brother Edward Lyle Fursman and a younger brother Robert Himes Fursman. Mr. Fursman attended the Moran and Grant Schools in Allen County, Kansas, for his elementary schooling and graduated from Grant School at the eighth-grade level. He then attended Moran High School graduating in 1941. While attending high school, he played left end with the football team and participated in track including running the high hurdles and on the relay teams. His relay team won the 1940 State Championship and he won many individual medals and honors. He served his senior class as Class President. While attending Iola Junior College on a football scholarship, his college schooling was cut short by World War II. After his enlistment he served with the Army Air Corps in the 666th Air Maintenance Squadron. Mr. Fursman served in both the United States and England and was with the 8th Air Force Third Division 447th Bomb Group on Station 126 while in England. He was discharged in November 1945 having achieved the rank of Staff Sergeant. On Sunday, May 18, 1947, at the Evangelical United Brethren Church, in Iola, Mr. Fursman and Florence Laura Hiser were married. After their marriage they lived in Iola until moving to Colony in September 1947. The four children born to Mr. and Mrs. Fursman were Susan Hiser, John Anton III, Nancy Johanna and Roxanne Elaine. Mrs. Fursman died Thursday, April 13, 2006, at Garnett, Kansas. Mr. Fursman was a farmer and rancher in the Anderson County areas of Welda and Colony until retiring in 1986. He learned to fly single engine land planes and earned his private pilot's license in 1948. In his later years, he remained interested in all types of planes and flying with his last time piloting a plane while flying over Kissimmee, Florida. He read and studied extensively especially in the areas of archeology and science. Mr. Fursman was a talented woodworker and had crafted grandfather clocks for his wife and each of his children from a walnut tree he harvested from the farm. He was appointed to fill an unexpired term on the Colony City Council in 1965 and in 1966 he ran for and won the election for Mayor. He continued to win re-election and serve as Mayor until 1974, including one term when he was unanimously elected. He served as Anderson County Democrat Central Committee Chairman and as a precinct committeeman. He was an active member of the Colony Lions Club after joining in 1963 and served as District Governor from 1971-1972 and held all officer and director positions through the years. He also served for a time as a volunteer firefighter for the City of Colony and was Chairman of the School Board for the Colony School system. Mr. Fursman is survived by his children John Anton Fursman, III of Garnett; Nancy Johanna Abernathy of Orlando, Florida; and Roxanne Elaine Dawson and her husband Charles of Great Bend; his grandchildren Michelle Lynnette Diebolt of Iola; Erika Leigh Fursman of Emporia; Jill Alexandria Avery of Wichita; and John Anton Fursman, IV of Lawrence; six great-grandchildren; and five great-great grandchildren; his son-in-law Donald D. Diebolt of Iola; and numerous other relatives including a cousin Laurilla Tennis. His wife Florence, daughter Susan, brothers Lyle and Bob, son-in-law Michael McGuire Abernathy and grandson Michael Darrel Diebolt died earlier. Graveside Services with military honors will be held at 2:00 PM, Saturday, January 23, 2021 at the Colony Cemetery. Memorials may be made to Colony Lions Club and left in care of the funeral home, 1883 US Hwy 54, Iola, Kansas 66749. Condolences to the family may be left at www.feuerbornfuneral.com.

The family of John A. Fursman Jr. created this Life Tributes page to make it easy to share your memories.

Send flowers to the Fursman family.