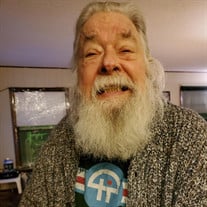 John A. Coons, age 77, passed away August 24, 2021, in Oklahoma City, Oklahoma. John was born March 3, 1944, to Albert and Mona Mary (Chapman) Coons in San Diego, California. He attended 2 years of Technical College before Joining the Navy in1964. He served in the Navy and the Army. While in the Military, he became an instructor in Automated Data Processing. He continued his service as a Civilian Computer Engineer/ Aerospace Engineer. His worked as a DOD-Civilian employee. His career moved him around from San Diego California, Kwajalein Marshall Islands, Oceana Naval Base, Virginia, Marine Corps Air Station, Beaufort, South Carolina, and finally Will Rogers Air National Guard Base in Oklahoma. After retiring from the Military life, he moved his family to Bronson, Kansas. He worked in food services at Fort Scott Community College and then transferred to Fort Scott Walmart, where he worked for 15 years. He was well known as the Bearded Santa that always greeted you with "Good Morning" regardless of the time "because it is morning somewhere". He and Lorinda May King entered marital bliss on July 1st, 1972, in Las Vegas. They were blessed with the greatest children in the world. Beginning with a long overdue arrival of Jonathan Courtney in 1973. A year later, in 1974, the highly anticipated birth of Jenniffer Louise was bestowed on the family. Cassandra Jean made her grand appearance in 1976. Michelle Lynn graced the family in 1979. In 1980, James Chandler made his impulsive entrance. Sabrina Lorinda made her majestic debut in 1983. Finally, Sarah Jane Latia was lovingly embraced into the family in 1987. John was known for his expansive knowledge of computers and programming. He was the "computer nerd" before computers were prevalent in society. He introduced all of his children to the wild world of gaming, even if the game may have been Pitfall. He made the Commador 64 a household appliance before publicly available. His love for computers continued throughout his adult years. His fondness for knowledge and learning was evident in his many hours of entertainment through Discovery channel and Historical content. He loved all things Science, Technology, Nature and History related. He participated in Ruitan and City Council. He spent many hours investigating and recording the family's genealogy. He would talk fondly about his childhood shenanigans with his brother. As well as, exploits with his children growing up. He told his children numerous times "I could have had a lot of money or a lot of kids, and we choose kids!" His love for Tropical attire was apparent through his vast collection of colorful shirts, which his family will be wearing in honor to celebrate his life. John is preceded in death by his wife, Lorinda, in 2001. His brother, Peter Michael, his parents, Albert Alvin and Mona Mary Chapman and daughter, Michelle Lynn in 1979. John is survived by a plethora of descendants. Jonathan, wife Gabriela and his children- Athena, Eric, Jude and Christopher. Jenniffer Coons. Cassandra and Philip Young with their children, Samantha, Danielle and Zachariah. James and Krista, with their children Ava and Isabella. Sabrina and Jeff Murphy with their children, Owen, Aubree, Ellie and Asher. SarahJane and her partner Tony, and her children Leiana, Jenaveve, Emeteria and Jared. Funeral services to honor the life of John will be held at 10:00 A.M. on Friday, September 3, 2021 at Feuerborn Family Funeral Service in Iola, Kansas. Burial will follow at Bronson Cemetery in Bronson, Kansas. Family will greet friends from 6:00 P.M. to 8:00 P.M. in The Venue at the funeral home the night prior to the service. Memorials in honor of John are suggested to CureIBM.org - IBM research Fund- donate to support Inclusion Body Myositis Research may be left with the funeral home or mailed to 1883 U.S. Highway 54, Iola, Kansas, 66749. Condolences for the family may be left online at www.feuerbornfuneral.com.

The family of John A. Coons created this Life Tributes page to make it easy to share your memories.

Send flowers to the Coons family.