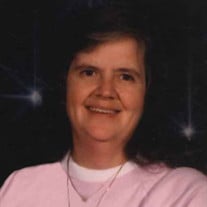 JoAnn Fritz, age 81, of Garnett, Kansas, passed away on Saturday, March 19, 2022, at St. Luke's Plaza, Kansas City, Missouri. She was born September 11, 1940, in Kansas City, Missouri, the daughter of Herman and Josephine (Leslie) Smithey. JoAnn graduated from Turner High School, Kansas City, Kansas. JoAnn married Joseph W. Fritz on March 27,1960 in Kansas City, Kansas, this union was blessed with three children. She will be remembered most as being a homemaker and caregiver. Joann also worked outside of the home helping operate the family roller skating rink in Kansas City, then when they moved to Garnett she went to work at Galey's Processing, and The City Café. While living in Burlington, she found enjoyment working at Country Critters making puppets. She then "retired" and started babysitting, continuing to do what she enjoyed, talking care of others. She opened her home and heart to many little ones that came to know and love her as Grandma JoAnn. She accomplished this while taking care of Joe through his illness and never complaining. When she moved back to Garnett she became very involved at the Senior Center as well as never missing Tuesday night Bingo at the V.F.W. While at Parkview Heights, she fine tuned her crocheting skills giving away many lap afghans, coasters, butterflies, etc. She found true joy being around family and friends but her greatest joy, well, next to Mickey Mouse, was her grandchildren and great grandchildren. She was preceded in death by her parents, Herman and Josephine Smithey; husband, Joseph Fritz on August 9, 2005; one brother, Herman Conrad Smithey; and one sister, Vera Swallow; two brothers-in-law, Frank Fritz and Bobby Fritz. JoAnn is survived by her children, Joseph W. Fritz and wife Sandie of Garnett, Kansas, Tiffin Daniel Fritz and wife Angel of Louisa, Virginia, Christine Talley of LeRoy, Kansas; 11 grandchildren, Logan, Preslee and Abbie; Danielle, Cody, Courtney, Levi, Mackenzie, Chloe; Jimmy, and Dallas; eight great grandchildren; one sister, Connie Mollett of Buckeye, Arizona; two sisters-in-law Sharon Fritz of Garnett, Kansas and Pam Fritz of Kansas City, Kansas; along with several extended family and friends. Funeral services will be held at 11:00 A.M., on Saturday, March 26, 2022, at Feuerborn Family Funeral Service Chapel, Garnett, with burial following in the Garnett Cemetery. The family will greet friends at 10:00 A.M., one hour prior to the service. Memorial contributions may be made to W.I.N.G.S. You may send your condolences to the family at www.feuerbornfuneral.com. Joann Fritz' funeral service can be watched here: https://vimeo.com/691888490

The family of JoAnn Fritz created this Life Tributes page to make it easy to share your memories.

JoAnn Fritz, age 81, of Garnett, Kansas, passed away on Saturday,...

Send flowers to the Fritz family.