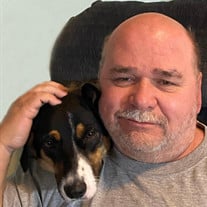 James "Jimmy/Dad/Grandpa/Papa Jim" Myers, age 56, of LaCygne, Kansas, was called home to a better place on Saturday, April 23, 2022, at Overland Park Regional Medical Center. He was born November 19, 1965, in California, the son of Jack and Emma Jean (Raines) Myers. Jimmy grew up in California and attended high school in Paramount, California. Shortly after high school, he moved to Illinois and spent most of his adult life in Illinois and Kansas. Jimmy's first marriage blessed him with his first daughter. Years later, Jimmy and Jenny (Ferguson) were married on April 11, 2015, in Garnett, Kansas. Jimmy worked various manufacturing and factory jobs through the years until suffering a career ending back injury. It was then that his true-life purpose came into view. He was THE BEST stay-at-home grandpa EVER! He taught life lessons, helped with homework, potty trained, bottle and pacifier broke, cuddled when they were hurt or sick, laughed with, played jokes on, and spoiled all the grandkids every chance he could! He was also famous, both at home and at work for his 'rag snapping wars', his shaving cream fights and his water fights. From the oldest all the way to the youngest, he is, without a doubt, the center of their world. Jimmy was formerly a Garnett Area Chamber of Commerce Ambassador and also volunteered countless hours helping at Cornstock. He also took a lot of pride in and enjoyed helping in any way needed at the local go kart races. Believe or not, though, one of his favorite things to do was attend Business and Professional Women local and state meetings and events. He was so passionate about being a member and supporting BPW that he was never shy about telling young women about the benefits of membership and telling all students about the scholarship opportunities. He told anyone that would listen. He also liked to 'junk' as his family would say, buying items at auctions or sales, giving them a little TLC and then re-selling them. He had a knack for always being able to find the good deals! Jimmy was preceded in death by his parents, Jack and Emma Jean Myers; one brother, David Myers; one granddaughter, Brittany Hrycyk; one brother-in-law, Frank Rink; and one son-in-law, Justin Hubbard. Jimmy is survived by his wife, Jenny Myers, of the home; three daughters, Linda Vestal of Jacobs Creek, Kansas, Alisha Morales of Meriden, Kansas, and Kayla Hubbard of LaCygne, Kansas; one son, Marcus Ferguson of Garnett, Kansas; nine grandchildren, Missy Larkin, Merissa Larkin, Maeson Larkin, Aedrieanna Morales, Jazlynn Hubbard, Aubree Ferguson, Natalee Ferguson, Ashton Ferguson, and Lydian Hubbard; one great grandson on the way, Lucas Waylon McAuley; three brothers, Steve Myers and Bill Myers, both of Centralia, Illinois and Bob Myers and wife Barb of Ashley, Illinois; one sister, Donna Rink of Centralia, Illinois; and many nieces and nephews. Also left behind are his beloved dogs, Marlee and Maverick and cat, Kitty Baby. The family will greet friends on Sunday afternoon, May 1, 2022, from 3:00 P.M. ~ 5:00 P.M., at the Feuerborn Family Funeral Service Chapel, Garnett. Cremation to follow and services will be held at a later date. Memorial contributions may be made to Kansas B.P.W. Educational Foundation. You may send your condolences to the family at www.feuerbornfuneeral.com.

James "Jimmy/Dad/Grandpa/Papa Jim" Myers, age 56, of LaCygne, Kansas, was called home to a better place on Saturday, April 23, 2022, at Overland Park Regional Medical Center. He was born November 19, 1965, in California, the son of Jack and... View Obituary & Service Information

The family of Jimmy Myers created this Life Tributes page to make it easy to share your memories.

Send flowers to the Myers family.