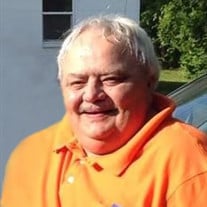 Jerry Edward Hunt, age 63, of Lansing, Kansas, passed away on Saturday, December 18, 2021, at Flippin, Arkansas. He was born July 2, 1958, in Garnett, Kansas, the son of Roland Edward and Elisabeth Marie (Rucker) Pierce. Jerry graduated from Garnett High School and played on the Bulldogs Football team. He graduated from DeVry University with a Tech and Engineering degree. For more than 40 years, Jerry was an Asbestos Inspector in several states including Washington, Connecticut and Kansas. He married Marsha Carey on April 28, 2015. In younger years, he played basketball and tennis with his buddies for fun. Jerry was a member of the Garnett Jaycees for many years. He was preceded in death by his father, Roland Edward Hunt; grandparents, Harriet Louise Hunt; and grandfather, Fred Harvey Hunt. Jerry is survived by his wife, Marsha Hunt, of Lansing, Kansas; mother, Elizabeth Rucker Pierce; two sisters, Vickie Due and husband Tommy, Gladys Hunt of Garnett, Kansas; brother, Fred Hunt of California; and a host of nieces and nephews. A Celebration of Life at a later date. You may send your condolences to the family at www.feuerbornfuneral.com.

The family of Jerry Edward Hunt created this Life Tributes page to make it easy to share your memories.

Jerry Edward Hunt, age 63, of Lansing, Kansas, passed away on...

Send flowers to the Hunt family.