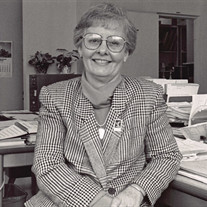 Jean Marie Barber, age 92, passed away Saturday, February 12, 2022, in Yates Center, Kansas. Jean was born November 1, 1929, in Conway Springs, Kansas, to Howard Carter "Dude" and Veda (Wise) Staley. Jean attended high school in Howard, Kansas, where she also graduated. She married Edwin J. Barber of Howard on May 28, 1949, and they made their home in Iola, Kansas, where they raised their three children. They later divorced in April of 1987 and Jean never remarried. Jean was active in her community, serving in the Welfare Department, Consensus Bureau, County Attorney's Office as the County Clerk, and also served as the first female County Commissioner in Allen County, Kansas. She was serving on the SEK Multi-County Health Department Board of Directors up until her passing. Jean was a loving and devoted mother, grandmother, and great-grandmother, and a positive influence to many. A true family matriarch! Jean was never shy of a new challenge or adventure in life and with family and friends. She was quite the bird enthusiast and dog lover. Jean is preceded in death by her parents, Howard "Dude" and Veda Staley; brother, Howard "Ellis" Staley; and sister-in-law, Betty (Flagler) Staley. Jean is survived by her children, Brenda Bumgarder of Iola, Kansas, Belinda Bertoncino of Maricopa, Arizona, and Barry Barber and wife, Nadine, of Winfield, Kansas; grandchildren, Tina (Barber) Goben and Derek Goben of Douglass, Kansas, and Cassie (Barber) Sowder and Casey Sowder of Derby, Kansas; and numerous other family members and friends. A celebration of life service will take place at 2:00 P.M. on Friday, February 25, 2022, at Feuerborn Family Funeral Service in Iola, Kansas. Memorials in honor of Jean are suggested to A.C.A.R.F. of LaHarpe, Kansas, and may be left with the funeral home or mailed to 1883 U.S. Highway 54, Iola, Kansas, 66749. Condolences for the family may be left online at www.feuerbornfuneral.com.

The family of Jean Marie Barber created this Life Tributes page to make it easy to share your memories.

Send flowers to the Barber family.