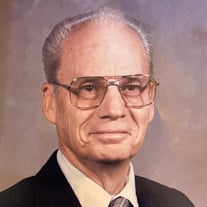 Jay M. Dutton of Colony, Kansas, passed away Wednesday, December 23, 2020. He was born January 25, 1927, in Iola to William George Dutton and Marietta (Gillispie) Dutton, during the middle of the Great Depression. Jay grew up on the family farm west of Neosho Falls. He graduated from Neosho Falls High School in 1945 and then attended Pittsburg State University for a time. In 1945 Jay enlisted in the U.S. Navy, serving two years during the ending of World War II, earning the rank of Yeoman Third Class. Upon discharge he returned to Neosho Falls where he married his high school sweetheart, Virginia P. George on April 11, 1948. Jay received his BS in Education from Pittsburg State University and his MA in Administration from Colorado State College of Education, Greeley, Colorado. In 1952 Jay began teaching at Longton, Kansas. Over his 37 year teaching career Jay taught business subjects in Longton (1952-56), Burlingame (1956-59), Kincaid, and Colony, Kansas (1960-89). Jay was the superintendent of schools in Thayer, Kansas from 1959-60 before moving to Colony in the fall of 1960. Jay retired from teaching in 1989. He enjoyed gardening and growing flowers. Jay was an active member of the communities in which he lived. He was a member of the Colony Community Church, where he served many roles, including Trustee and Treasurer. Jay was a longtime active member of the Colony Lions Club. He served 3 times as president and was District Governor 1970-71. Jay was proud of the club’s accomplishments while he served as president. Some of their projects included constructing Colony’s first heated fire barn, attached to the old city hall and the Committal Building in the cemetery. Jay also served on the City Council and is a member of the V.F.W. and American Legion. Jay was preceded in death by his parents; three brothers, Everett, Lynn and Orville; a sister Wilma Johnson; a daughter-in-law Marinda Dutton; and great grandson, Knox Jay Dutton. He is survived by his wife of 72 years, Virginia, of their home; two sons, Jerry Dutton and wife, Elizabeth of Meadow Valley, California; David Dutton of Granger, Indiana; daughter, Jayne Miller and husband, Jim of Garnett, Kansas; eight grandchildren; twelve great grandchildren; three step-great grandchildren; two step-great great grandchildren; and a number of nieces, nephews, other relatives and friends. Jay’s greatest love was spending time with the grandchildren and great grandchildren; especially attending their school activities when he could. Funeral services will be held at 2:00 P.M., Wednesday, December 30, 2020, at the Colony Community Church with Pastor Steve Bubna officiating. The family will greet friends from 1:00 PM until the start of the service on Wednesday at the church. Interment will follow in the Colony Cemetery. It was Jay’s request the memorial contributions be to the Colony First Responders or the Colony Lions Club. The family requests that everyone wear a face covering while attending the services. For those unable to attend the service, it will be available for viewing via www.feuerbornfuneral.com. Condolences to the family may be left at www.feuerbornfuneral.com. Jay Dutton's funeral service can be watched here: https://zoom.us/j/95532635004?pwd=MHF4Qm14MGdNOVpZcmlOOTBtTFovdz09 Meeting ID: 955 3263 5004 Passcode: Dutton

Jay M. Dutton of Colony, Kansas, passed away Wednesday, December 23, 2020. He was born January 25, 1927, in Iola to William George Dutton and Marietta (Gillispie) Dutton, during the middle of the Great Depression. Jay grew up on the family farm... View Obituary & Service Information

The family of Jay Dutton created this Life Tributes page to make it easy to share your memories.

Send flowers to the Dutton family.