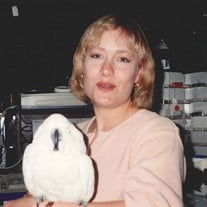 Janice Rene Porter, age 57, finished her 18+ year battle with cancer on the 18th of December 2020 at one o’clock that Friday afternoon. This wonderful woman did not let her illness stop her from living a full life as witnessed by her continuous community service and the birth of her last two children after her first cancer surgery. Many people will remember her as the Iola Preschool teacher, where she enriched the lives of countless children while working for the ANW Cooperative from 1987 to 2006. Some will remember her as the perky little blonde waitress that worked at Bonnie’s Café in Gas during the late 1990’s. Some will remember her as a dance mom going to her daughter’s rehearsals, recitals, and competitions. Most will remember her as the woman that truly loved all animals, breeding lovebirds and parrots with her friend Theta Johnson (whose cockatoo is in the photograph) and later as a volunteer worker and director of A.C.A.R.F. in LaHarpe from 2010 up until her illness prevented her from working earlier this year. Janice Rene Denney was born in Helena, Montana on Saturday, 02 November 1963. Her family moved several times because of her father’s railroad employment. She grew up in Billings, then Kansas City, then St. Louis, and finally Waukesha. She graduated from the University of Wisconsin at Whitewater and move to Iola in July of 1987. She met her future husband one month later and after only 7 years of dating, Janice and Lane were united in marriage on Saturday, 09 July 1994 by Revered John Skillings at the Presbyterian Church in Iola, followed by a rather large wedding reception (Janice was a party girl at heart!) featuring catered food (including mountain oysters) much libation and a live band. The most in demand dance partner was Janice’s travel companion, Chuck. All the ladies had to dance with Chuck! (For those of you who did not know Janice, Chuck was a life-sized doll made for her by her Aunt Reba because she was worried about Janice driving long trips by herself and she made Janice promise to keep Chuck in the front seat when she drove long distance so she would not get robbed or worse.) Going to high school and college in the Milwaukee area, Janice was a rock’n’roll girl and attended many concerts, seeing live performances of many of the biggest bands from the 1970’s and the 1980’s. One of my favorite stories is the time when I came home to find her really upset and crying her eyes out. Thinking the worst, I asked her what had happened, and she replied, through her sobbing, “I was driving home from work…listening to country music…and…and…I knew the words to the song!” I started laughing and she immediately switched from sad to mad and started beating me about the head and shoulders. The city girl had been country-fied. Janice was preceded in death by a son, Gage Thomas Porter in 2002; her mother, Eileen Denney in 2009; and her father, Gene Denney on 21 July 2020 while Janice was still in K.U. Medical Center recovering from a major cancer surgery. She is survived by her husband, Lane Porter and children, Barry and Cara Porter, of the home; son, Paul and his wife, Hayley of Columbia, Maryland; one brother, Bruce Denney and his wife, Stephanie of Bella Vista, Arkansas; mother-in-law, Sheryl Porter of Iola; father-in-law, Paul Porter and his wife, Toni of Wichita, Kansas; sister-in-law, Lori Mann and her husband, Brek of Aurora, Colorado; nephew, Alex Mann and niece, Lexi Mann of Aurora, Colorado. There will be no funeral service or burial at this time due to the pandemic, only cremation per Janice’s wishes. There will be a celebration of life service, probably on her wedding anniversary in July or on her birthday in November, when conditions allow. The family wishes for no cards or flowers to be sent. Instead, they wish for memorials to be left with Feuerborn Family Funeral Service in Iola at 1883 U.S. Highway 54, Iola, Kansas in Janice’s name to one of the three following non-profit organizations: A.C.A.R.F. of LaHarpe, Kansas, Harry Hynes Memorial Hospice, or Wings of Warriors, which is a local charity that give much needed support to those fighting cancer. Condolences for the family may be left online at www.feuerbornfuneral.com.

Janice Rene Porter, age 57, finished her 18+ year battle with cancer on the 18th of December 2020 at one o&#8217;clock that Friday afternoon. This wonderful woman did not let her illness stop her from living a full life as witnessed by her continuous... View Obituary & Service Information

The family of Janice R. Porter created this Life Tributes page to make it easy to share your memories.

Send flowers to the Porter family.