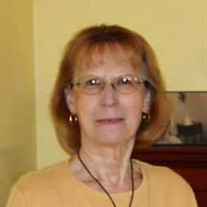 Janet Lynn Chriestenson, age 69, of Garnett, Kansas, passed away on October 16, 2020, at her home. Janet was born on December 18, 1950, at Gardner, Kansas. Janet was the first of six children born to Dick Leslie Perdue and Pauline Joyce (Dana) Perdue. Most of her growing up years were in Roeland Park and Olathe, Kansas. She especially enjoyed spending time with her Grandmother Dana at the Dana Farm. Janet graduated from Olathe High School in 1968, when there was only one Olathe high school, and she even had some of the same teachers as her parents. Later that year, Janet and Alvin Nels Chriestenson were married on December 21. Their union was blessed with two children, Mark and Alison. Thirteen days after their marriage, Alvin left the states as a soldier in the Army for Vietnam. Janet’s interest was in cozy memories, quilting, and miniatures. She also made numerous afghans for Habitat for Humanity in Arcadia, Florida, where she and her husband had a small winter “getaway”. She was preceded in death by her mother, Pauline Dana and her daughter, Alison Rue, on September 12, 2020. Janet is survived by her husband, Alvin Chriestenson, of the home; son, Mark Chriestenson and wife Becky, their children, Marshall, Christopher, Gunner, and Alyssa, all of Edgerton, Kansas; son-in-law, Russell Rue, his children, Abigail and Lillian Rue; her father, Dick Perdue of Olathe, Kansas; three sisters and two brothers, Vicky Rothus and husband, Gary, Don Perdue of Gardner, Kansas, Diane Nelson and husband, Scott of Olathe, Kansas, Dean Perdue and wife, Bev of Argyle, Texas and Julie Salisbury and husband, Dan of Hillsdale, Kansas; and several nieces and nephews. Funeral services will be held at 10:00 AM, Saturday, October 24, 2020, at the Garnett Church of the Nazarene, with burial following in the Colony Cemetery, Colony, Kansas. Janet's family will greet friends at the church from 9:00 AM until the start of the service on Saturday morning. Memorial contributions may be made to Garnett Church of the Nazarene or to St. Luke's Hospice and left in care of the funeral home. Condolences may be left at www.feuerbornfuneral.com.

Janet Lynn Chriestenson, age 69, of Garnett, Kansas, passed away on October 16, 2020, at her home. Janet was born on December 18, 1950, at Gardner, Kansas. Janet was the first of six children born to Dick Leslie Perdue and Pauline Joyce (Dana)... View Obituary & Service Information

The family of Janet Lynn Chriestenson created this Life Tributes page to make it easy to share your memories.

Send flowers to the Chriestenson family.