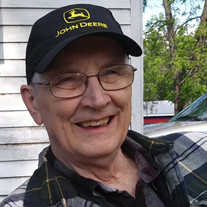 James (Jim) Yeager, age 78, of Garnett, Kansas, passed away on Sunday, April 3, 2022, at his home. He was born August 22, 1943, in Harris, Kansas, to Frank C. and Katie A. (Sumner) Yeager. Jim graduated from Garnett High School with the Class of 1962. During his sophomore year, he met the love of his life, Carol Randall. They married February 18, 1962. Jim and Carol deepened their roots in the town of Garnett by starting a family resulting in three daughters, Janette (Jan), Anita (Nicki) and Angela (Angel). Jim and Carol celebrated their 60th wedding anniversary on February 18, 2022. Jim was a talented musician. At the age of 3, he sang a high tenor voice until he could no longer sing on the side of Heaven. At the age of 5, Jim and his sisters sang in the talent show at the Waverly fair and won first place. Around the age of 14, he taught himself to play the rhythm guitar. Throughout the years, he learned to play many stringed instruments. He could yodel too! Jim shared his love for music with fellow music lovers who became his lifelong friends. He worked as a meat cutter as he started his career as a tractor mechanic under the tutelage of his dad, Frank. He worked for John Deere and International Harvester and went on to work for 28 years as a heavy equipment mechanic and supervisor with KDOT. In retirement, Jim was an avid reader, enjoyed food, tinkering outside in the summer, with his dog Sammi and spending time with his family. Jim was the kindest man with the sweetest smile and generous heart. Jim was preceded in death by his parents, Frank and Katie Yeager; three brothers, William, Steven and Milton Yeager; two sisters, Ida Merle Yeager and Karen Powell; and one son-in-law, Bill Betts Jr. He is survived by his wife Carol Yeager, of the home; three daughters, Jan Fultz and husband Donny of Garnett, Kansas, Nicki Yeager-Saunders and husband Jim of Osawatomie, Kansas, and Angel Thacker and husband James of Garnett, Kansas; one sister-in-law, Ruth Randall-Martinez of Wamego, Kansas; eight grandchildren, Kati Yeager, Ryan Fultz and wife Shavelle, Chandler Betts and wife Kylie, Cameron Betts, Landon Thacker and wife Katelynn, Alaina Thacker, and JoAnna Thacker, Benjamin Saunders and wife Ashley; eight great grandchildren, Jaxon, Journi, Cooper, Aleah, Kaidyn, Huxton, Damian and James. Jim's family was the center of his world. Cremation is planned and no services are planned at this time. You may send your condolences to the family at www.feuerbornfuneral.com.

The family of James Yeager created this Life Tributes page to make it easy to share your memories.

Send flowers to the Yeager family.