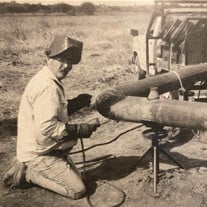 James "Tobe" Tilton, age 71, of Eudora, Kansas, formerly of Garnett, Kansas, passed away on Friday, November 26, 2021, at his home. He was born April 25, 1950, in Coffeyville, Kansas, the son of N.P. and Odessa (Borror) Tilton. Tobe graduated from Garnett High School with the Class of 1968. He married Maureen O'Connor on May 8, 1976 in Garnett, Kansas. This union was blessed with four children. He served in the Vietnam War with the United States Army and was promoted to the 101st Airborne Division as an Army Ranger. After Vietnam, he traveled the United States working with multiple pipeline companies. Returning home, Tobe took a job with the Cities Service Pipeline and retired from Southern Star Pipeline in 2010. After retirement, he worked for various pipeline companies as an inspector. Tobe was an active member in the #798 Pipeliner's Union. Tobe enjoyed coaching youth baseball and adult women's slowpitch softball teams. He was an adamant Jayhawk fan, spending his weekends in Lawrence attending games. Tobe was a member of the V.F.W. organization, Knights Of Columbus, Masonic Delphian Lodge #44, and a member of the Shriner's Organization. He was preceded in death by his parents, N.P. and Odessa Tilton; and one brother, Raymond Tilton. Tobe is survived by his wife, Maureen Tilton, of the home; one son, Shamus Tilton of Greeley, Kansas; three daughters, Karmin Tilton of Greeley, Kansas; Sheena Tilton and Keely Tilton, both of Eudora, Kansas; and seven grandchildren. Graveside services will be held at 1:00 p.m., on Thursday, December 2, 2021, at the Garnett Cemetery, Garnett, Kansas. The family will greet friends at the Feuerborn Family Funeral Service Chapel on Wednesday evening from 6:00 p.m. to 8:00 p.m. Memorial contributions may be made to Garnett V.F.W. Local #6397. You may send your condolences to the family at www.feuerbornfuneral.com.

James "Tobe" Tilton, age 71, of Eudora, Kansas, formerly of Garnett, Kansas, passed away on Friday, November 26, 2021, at his home. He was born April 25, 1950, in Coffeyville, Kansas, the son of N.P. and Odessa (Borror) Tilton. Tobe graduated... View Obituary & Service Information

The family of James "Tobe" Tilton created this Life Tributes page to make it easy to share your memories.

Send flowers to the Tilton family.