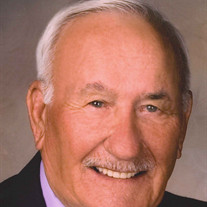 James "Jim" Rickerson was born in Wichita, Kansas, on December 12, 1934, the 5th son of Mamie and Charles Rickerson of Butler County, Kansas. He attended rural grade school in Butler County, Kansas. He then attended Towanda High School for 2 ½ years. In 1950, his parents purchased farms in Woodson County, he then finished school in Humboldt, Kansas, where he graduated in 1952. He met and married the lovely, Norma Blake, later that year. Jim went to work drilling on an oil drilling rig in eastern Kansas by night and helping his father on the farm by day until 1954, at which time he took a position as an electric lineman with the City of Chanute, Kansas. He received several promotions and worked there until 1964. During this time, due to low wages, Jim always worked part time at laying carpet, tile, driving a cab or any other trade to supplement his income. During these years, Jim and Norma had 7 children, James Lee, Brenda, Russel, James, Christine, Cathy, and Kendall. In 1964, he accepted a position as a foreman in Electric Line Construction in El Dorado, Kansas. Rebuilding systems all over the tri-state area. In this same time period, he built a 33-unit mobile home park with storage units and laundry. In 1970, he started his own electric business doing construction for cities and oil companies, such as City Service Oil, Gulf Oil, and cities all over Kansas and Oklahoma and several REA Companies. In 1980, Jim built a car wash and rental storage building. In 1985, due to a fall in oil prices and high interest rates, construction work came to a halt. In 1987 after closing the business, he took a job at the City of Osawatomie, Kansas as City Director of Utilities, rebuilding their electric systems, overseeing the operation of the power plant, water plant, sewer plant systems and street projects, plus many other duties. In early 1990, he was asked to take the city management position along with his other duties which he did, until retirement in the fall of 1996. Jim loved building homes, so in 2003, he built their retirement home in rural Lane, Kansas, where he spent a lot of time fishing with his wife Norma and their grandchildren. In 2005, Jim and his son Russel started developing some oil leases in Allen County, Kansas, which continued until Jim reached 80 years of age, at which he officially retired. Jim's hobbies included fishing, hunting, bowling and oil production. Jim is survived by his brothers: Bob of Saint Paul, Kansas and Max of Chanute, Kansas; sisters Barbara of Chanute, Shirley of Andover, Kansas, Paulene of Osawatomie, and Sue of Humboldt, Kansas; sons Russel of Rantoul, Kansas, Kendall of Gardner, Kansas; daughters Christine of Montrose, Missouri, Brenda of Wichita, Kansas, Cathy of Wichita; 16 grandchildren; 18 great grandchildren; and many nieces and nephews. Proceeding him in death were his parents Mamie and Charles Rickerson; brothers Don, Dean, and Jean; sisters Unise, Dorris and Betty; his wife Norma; infant son James Lee; and son James Allen.

The family of James L. Rickerson created this Life Tributes page to make it easy to share your memories.

James &quot;Jim&quot; Rickerson was born in Wichita, Kansas, on December...

Send flowers to the Rickerson family.