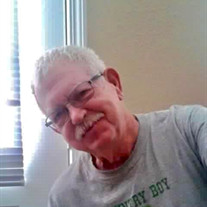 James Michael "Mike" Malloy, 73, Baldwin City, Kansas, passed away Thursday, September 30th, 2021, in Wichita, Kansas. He was born June 23rd, 1948 in Iola, Kansas, the son of Earnest David Malloy and Faye Vivian Michael Malloy. He was raised in Iola, Kansas and was a Graduate of La Harpe High School in 1965. Mike was employed by Brady Trucking and had been a dedicated truck driver for more than 50 years. He attended Living Water Fellowship Church in Gas City, Kansas, where he became a born again Christian and gave his heart to the Lord. Mike is preceded in death by his parents, Earnest David Malloy and Faye Vivian Michael Malloy; three brothers, Dale Malloy, Albert Malloy, and Harvey Malloy; one sister, Beverly Ewing, along with a niece, Angela Maley; and a great-grandson, Jamarion James Garcia. Mike is survived by his wife, Wanda Malloy; his three children, Shawn Malloy of Iola, Kansas, Dawn Malloy of Lenexa, Kansas, and Amanda Malloy of Topeka, Kansas, as well as by three step children, Natasha Hulett, Ashley Trout of Baldwin City, Kansas, Lauren Honas and husband Josh of Olathe, Kansas; three brothers, Roy Malloy of Iola, Kansas, David Malloy and wife Kathy of Humboldt, Kansas, and Dennis Malloy of Iola, Kansas; three sisters, Wynona Leslie and husband Mike of Iola, Kansas, Debbie Lindholm and husband John Houston, Texas, and Sondra Malloy of Iola, Kansas; along with a sister-in-law, Sharon Malloy of Wichita, Kansas; Mike was the grandfather to 14 grandchildren and great-grandfather to 6 great grandchildren; and uncle to several nieces and nephews. When Mike was not behind the wheel, he enjoyed the simple pleasantries of fishing and watching old western movies. He of course also enjoyed spending time with his multiple grand and great grandchildren. Mike had an infectious laugh and ornery personality. He is loved by many, including the many long-term friends he made during his career as a truck driver. Mike's core friendships were strong and he could spend hours talking on the phone with them. His presence will truly be missed by a vast majority. Funeral services will be held at 2:00 p.m., on Thursday, October 7, 2021, at the Feuerborn Family Funeral Service Chapel in Garnett, Kansas, with burial to follow in the Richmond Cemetery, Richmond, Kansas. In lieu of flowers, the family suggests memorial contributions to the James Malloy Memorial Fund. You may send your condolences to the family at www.feuerbornfuneral.com.

The family of James M. Malloy created this Life Tributes page to make it easy to share your memories.

Send flowers to the Malloy family.