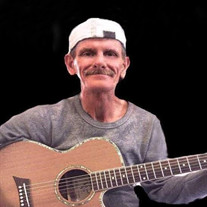 James Erwin Crider "Critter", age 65, of Welda, passed away on Thursday, February 24, 2022, at the Anderson County Hospital. He was born on March 5, 1956, in Kansas City Kansas, to William Charles Crider and Doris Louise Tucker. He graduated from Garnett High School in 1974. He served in the US Army from 1975-1981. He was a paratrooper with the 82nd Airborne Division. He attended Allen County Community College where he received an Associate's Degree. James was easy going and carefree. He was a good and loyal friend, and he loved his family, especially his nieces and nephews. He enjoyed singing and playing the guitar and he loved making people laugh. As a young man his Grandpa Tucker taught him the basic cords on the guitar, and he taught himself to play. The guitar became his passion. Wherever he was there was usually a guitar. He could pick it up and play just about any song you asked him to. He became known as "The Guitar Man". He liked to fish and hunt and in recent years, he loved to go to auctions. He enjoyed buying and selling things at flea markets. He loved to debate, especially politics, which he was passionate about. He liked to spark up a conversation, especially if he knew you didn't agree with him just so he could get his point across. James was kind and generous man with a loving heart. He will be greatly missed by his family and friends. He was preceded in death by his father, William Charles Crider, his mother, Doris Tucker Bunch, his grandparents, Ulis Tucker Sr. and Alice Louise Tucker. James is survived by his sisters, Jessica Phifer, Ottawa, Marla Ryser, Salt Lake City, Utah, stepfather James Bunch, Louisiana, his aunt and uncle Ulis Tucker Jr and his wife Joy and many uncles, aunts, nieces nephews and cousins. James had 5 siblings who were adopted at a young age by other families. Billie Jo, Melody, Laura, Dawn, and John. James was cremated and inurnment will be at the Welda Cemetery. A Celebration of Life is being planned by his family to be held at a later date. In lieu of flowers his family requests that donations be made to the James Crider Memorial Fund and left in care of the funeral home.

James Erwin Crider "Critter", age 65, of Welda, passed away on Thursday, February 24, 2022, at the Anderson County Hospital. He was born on March 5, 1956, in Kansas City Kansas, to William Charles Crider and Doris Louise Tucker. He graduated... View Obituary & Service Information

The family of James Erwin Crider created this Life Tributes page to make it easy to share your memories.

James Erwin Crider &quot;Critter&quot;, age 65, of Welda, passed away on...

Send flowers to the Crider family.