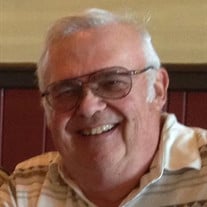 James Edward Bond, age 75, was born August 18th, 1946, in Lawrence, KS and died April 26, 2022, at his home in Garnett. The eldest son of Edward U and Annie E. (Provorse) Bond, he was given the name of his paternal grandfather. James served as a military policeman from 1965 to 1968 which opened the door to a career in law enforcement. He was a member of the Garnett Police Department from 1971 to 2005, serving many years as Chief of the department. James was an advocate of continuing professional development for police officers and pursued professional development in a wide array of law enforcement skills. James was an NRA-certified pistol instructor who assisted others in enhancing their handgun skills and safety practices. James was an outdoorsman. He pursued salt and freshwater fishing, upland gamebird hunting, and gardening, but his true passion was for big game hunting. He was a member of Safari Club International and regularly attended SCI conventions where he established connections with guides from around the world and was able to enjoy socializing with other hunters including an enjoyable poker game with legendary hunter and author Peter Capstick. At one SCI convention, James reported having "the most expensive free beer of my life" when he stopped by an auction tent and found an extended African hunt being sold at a price that was too low to pass up. His big-game hunts ranged across North and South America, Europe, and Africa. He successfully pursued Cape buffalo, a leopard, and a variety of other African game, but he was most devoted to antelope hunting and holds several ranked positions in antelope categories of the SCI Record Books. James E. Bond is survived by his brothers Richard T Bond & wife Linda (Kreipe) of Topeka, KS and Edward U Bond & wife Linda (Bertrand) of Peoria, IL. He is survived by nephews and nieces: Nolle Bond and wife Libby of Kansas City, Kari Donovan and husband Mike of Denver, CO, Carissa Bond of Dunlap, IL, Brian Bond of Peoria, IL, and 3 great nieces. Funeral services will be held at 2:00 P.M. on Saturday, May 7, 2022, at Feuerborn Family Funeral Service Chapel in Garnett, Kansas. In accordance with his wishes, his ashes will be spread in a wilderness location at a later date. Memorial contributions may be made to the Garnett Community Foundation. You may send your condolences to the family at www.feuerbornfuneral.com.

James Edward Bond, age 75, was born August 18th, 1946, in Lawrence, KS and died April 26, 2022, at his home in Garnett. The eldest son of Edward U and Annie E. (Provorse) Bond, he was given the name of his paternal grandfather. James served... View Obituary & Service Information

The family of James Edward Bond created this Life Tributes page to make it easy to share your memories.

Send flowers to the Bond family.